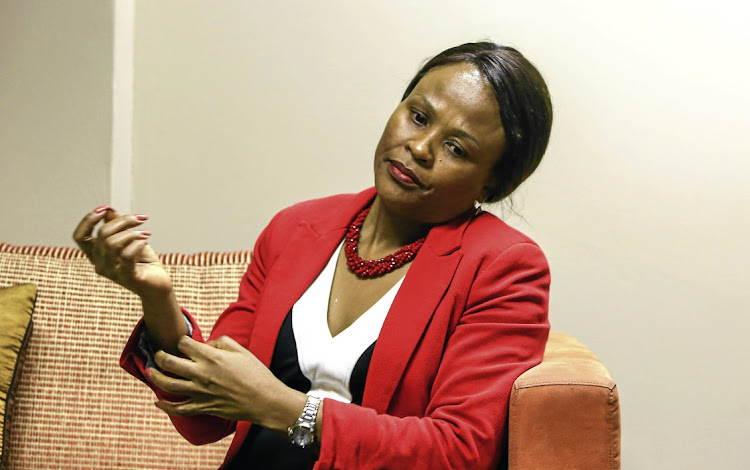 Parliament's justice and correctional services committee is expected to consider a draft report on the request to expedite procedures to remove Busisiwe Mkhwebane from office.
Image: Simphiwe Nkwali

Fresh after having to defend herself against comments by finance minister Tito Mboweni questioning her ability, public protector Busisiwe Mkhwebane will now come under scrutiny from parliament's justice and correctional services committee.

In a brief statement, the justice and correctional services portfolio commission said it would "consider a draft report on the request to expedite procedures to remove [Mkhwebane] from office".

The report is to be considered on Tuesday morning.

Mkhwebane has been under fire after a number of adverse findings against her, most notably a scathing ruling by the High Court in Pretoria in 2017 which found she grossly over-reached her powers when she recommended that the constitution be amended to alter the mandate of the Reserve Bank.

It was this ruling - among others - that led DA chief whip John Steenhuisen to write to National Assembly speaker Baleka Mbete to request an inquiry into Mkhwebane's fitness to hold office.

The ANC in December sided with Mkhwebane and dismissed Steenhuisen's request.

Tuesday's consideration of the report comes less than a week after Mboweni expressed his lack of confidence in Mkhwebane while responding to a question during a pre-budget media briefing last week Wednesday.

During the briefing, Mboweni affirmed that he still had full confidence in his director-general Dondo Mogajane, and intended to take Mkhwebane’s findings against Mogajane – who failed to disclose a criminal conviction when applying for his job – on judicial review.

In a report published last year, Mkhwebane found that Mogajane had failed to declare a traffic offence conviction when he was being considered for the position of treasury director-general, and recommended that remedial steps be taken against him.

“I hope one day I can have a conversation with the incumbent without interfering, but just to advise. She has made a finding that Speedy Dondo [Mogajane] must be disciplined – he has a speeding fine. If I could take an opinion poll here, most of you have speeding fines,” Mboweni said at the time.

Mkhwebane hit back saying that she would be writing to president Cyril Ramaphosa and Speaker Baleka Mbete to “report ministers who interfere with the functioning of her office in violation of the constitution”.

“The conviction ought to have been disclosed, given that the government Z83 form, which is used to gather information about prospective employees, explicitly probes if applicants have a criminal record, a question to which the applicants are required to respond with a ‘yes’ or a ‘no’. In response to this question, Mogajane replied with a ‘no’, despite having been made aware previously that this kind of conduct amounted to dishonesty on his part.

“The president has already pronounced that he is taking action in this matter. It is therefore strange that the minister appears to be contradicting the president,” said Mkhwebane.

Mkhwebane issued a report in December on improper conduct regarding Mogajane's application for the position, and his subsequent appointment to the position.

Mogajane was found guilty of contravening the Road Traffic Act in Kempton Park in 2011 by engaging in “reckless and negligent driving” and earned himself a criminal record when he paid an admission of guilt fine after being caught speeding.

Two weeks ago, Ramaphosa asked higher education minister Naledi Pandor to take disciplinary steps against Mogajane for his failure to disclose a criminal record when he applied for his job.