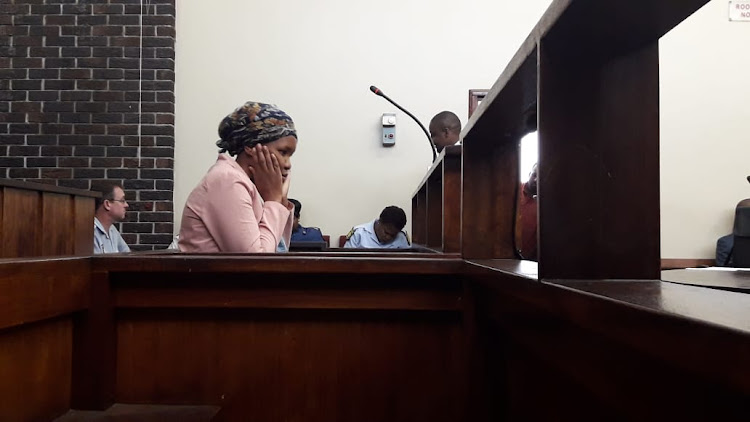 Blackhill Primary School teacher Fikile Nkambule, who is alleged to have locked a Grade 1 learner in the school strongroom overnight, appears in the Witbank Magistrate's Court on Monday February 25.
Image: Naledi Shange

The 30-year-old Witbank teacher alleged to have locked a grade 1 learner in a strongroom at Blackhill Primary School, forgetting him there overnight, is four months pregnant.

Submitting her bail application before the Witbank Magistrate's Court on Monday, Fikile Nkambule said in her affidavit that she was also a mother to a nine-year-old child and a positive contributor to society.

While state prosecutor Fredah Tshwane did not oppose her bail, she disputed that Nkambule was an upright citizen.

Wearing a blue dress, pink jacket and a scarf wrapped around her head, Nkambule kept her head down and appeared nervous as she followed proceedings through an interpreter.

The teacher, charged with a schedule five offence for child neglect and kidnapping, only flashed a brief smile before proceedings when she noticed two of her friends seated in the court benches. She waved at them but the pair sobbed as the proceedings got under way.

Nkambule described the incident as an unfortunate accident, adding that she had been stressed during her pregnancy.

Mpumalanga's education department confirmed on Sunday that a Witbank teacher who was suspended for allegedly locking a grade 1 learner in a ...
News
2 years ago

Her lawyer requested that she be granted bail on the basis that she is a first-time offender, is formally employed, has a fixed address, is pregnant and co-operated with police upon learning of the pending charges.

Magistrate Mdumiseni Mavuso granted her bail of R2,000, saying there was no reason to deny the request.

The case was postponed to April 26.

Mavuso gave strict bail conditions that Nkambule not contact the child, nor set foot near the school until the matter is finalised.

The report from the counsellors who dealt with the child will be entered as evidence when court resumes in April.

Barely an hour after the proceedings were adjourned, Nkambule was seen outside of court, hugging and rejoicing with her relatives after her bail was paid.

The six-year-old pupil was locked in the strongroom last Wednesday from 1.30pm, when the school day ended, till around  9.30am the following morning, when he was eventually found.

TimesLIVE visited the school and saw the small, narrow room, which measures approximately 1.5m by 2.5m. The room has several shelves that are stacked with boxes, files and a large printer.

While there is a large LED tube light in the room, the light is non-functional. When the door is closed, the cramped room falls into pitch-black darkness. There is no window in the room, so there is hardly any ventilation.