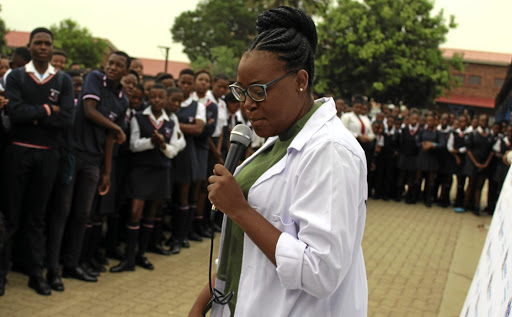 Doctors at a Gauteng hospital are treating an increasing number of people with severe sjambok injuries related to mob justice.

This has led to Pholosong Hospital in Tsakane, Ekurhuleni, embarking on a community awareness campaign aimed at addressing the issue as well as others such as teenage pregnancy.

The hospital recorded 80 sjambok cases in 2018, with some of those patients dying and others experiencing health complications.

"Sjambok injuries because of mob justice are another challenge because these patients become so complicated that [the victims] can even go into renal failure," Pholosong clinical manger Dr Nthabiseng Magana said.

According to a hospital report, the mob justice victims are often youth.

Magana said these cases were burdening the facility, so this had prompted the hospital to start an outreach project called Doctor in my Classroom, aimed at educating the youth.

She said 33 intern doctors visit schools in places such as Tsakane, KwaThema and Duduza to educate the youth.

"This is to say that police are there for a reason. You can't take the law into to your own hands," she said

Magana said another challenge was the high number of teenage pregnancies which resulted in more caesarean section surgeries being performed at the hospital.

WATCH | Doctors sing for healing and people love it!

Two young female doctors are warming the hearts of many with their rendition of the gospel hymn Phind’ukhulume moya oyingcwele.
News
2 years ago

"We want to target teenage pregnancy because it is one of the complicated medical conditions that we get," she said.

Magana said during the classroom workshops, doctors tackle topics such as sex and contraceptives.

Ekurhuleni East police spokesperson Sgt Harry Manaka said the area was troubled by house robberies and thefts by drug addicts who are out to get a fix.

Manaka said the situation was so overwhelming, community members were losing patience with the law.

"The community is under siege and they feel that handing them [criminals] over to police is a waste of time," he said.

Manaka said this was also taking its toll on police resources because these addicts required police guard while admitted at hospitals.

"Drug addicts are not the only thing we have to attend to. We have to protect the community from other violent crimes but they take up a lot of resources and time," he said.

Manaka urged communities to refrain from taking the law into their own hands.

Ndiphe Krune, 25, an intern doctor, who joined the team six weeks ago, has already given a talk at one school.

"I think it's a good idea to have young medical professionals go to schools and talk about issues that affect the youth in our country, particularly depression and teenage pregnancy, because those are the cases we see on a daily basis here at the hospital," Krune said.