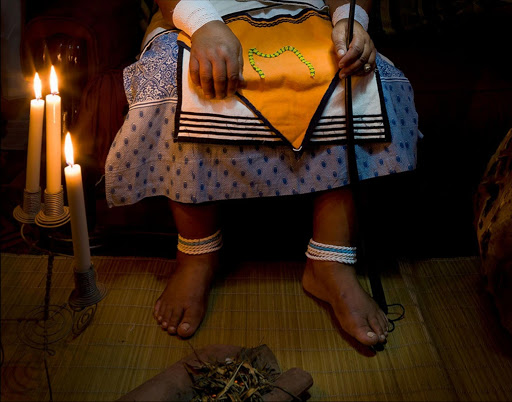 The CRL Rights Commission is hearing a case of a grade 10 pupil being allegedly victimised for being a sangoma.
Image: Peter Frank

A grade 10 pupil at a Gauteng high school was forced to drink "anointing oil" to rid her of her "demons", the CRL Rights Commission heard on Friday.

This was on top of the pupil allegedly being victimised for wearing her sangoma beads at the Sunward Park High School. The commission called the school's staff members to explain why the child was victimised for being a trained sangoma.

The provincial education department last month confirmed they were aware of the allegations that the pupil at the Ekurhuleni school had been labelled a demon by some teachers and ordered to remove her sangoma beads.

According to the school's code of conduct, pupils are not allowed to wear beads as they are regarded as jewellery.

The school's deputy principal, Enoch Thango, told the commission that on January 11 he held a meeting with teachers at the school to inform them that the pupil was a practising sangoma.

"I introduced [the learner] as a trained and practising sangoma. I was shocked by the reaction from most teachers when I told them," he said.

When pressed to elaborate on the reaction, Thango said: "There was mumbling happening and I got a sense that the teachers were not approving."

Thango said black teachers told him that they did not have a problem with the learner wearing beads, as long as she did not do it at the school.

CRL Rights Commission chair Thoko Mkhwanazi-Xaluva asked Thango about an incident that took place in 2017 when the learner was forced to drink a substance.

Gauteng's education department on Friday confirmed being aware of allegations that a pupil at Sunward Park High School in Ekurhuleni had been ...
News
3 years ago

According to the commission, a teacher at the school, who is also a pastor, made the learner drink "annointing oil" to rid her of demons.

The learner ended up in hospital after drinking the oil.

"I was not aware of the incident. I only became aware of it recently. The matter was not made public when it happened," Thango said.

Mkhwanazi-Xaluva asked if the teacher would be disciplined for his actions.

Thango said staff at the school needed to be educated about African culture.

Nadia Walljee, a teacher at the school, denied that the learner was ever called a demon. She said she was called by the principal, Ansie Peens, at her office to ask her input on a letter the learner brought to the school.

The letter, according to Walljee, asked Peens to protect her from victimisation as she was a sangoma.

"At no stage did I say the learner was a demon because I myself, have a gift."

The Muslim teacher said she was called names because of the attire she wears.

"I know being victimised. When I go to the airport I'm subjected to a specific search because people think I'm a terrorist. I have been called a ninja," Walljee said, in reference to her religious attire.