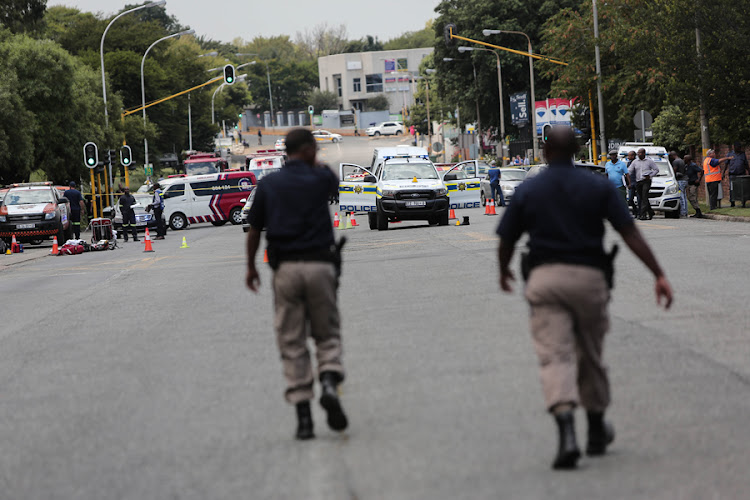 Members of the police are pictured at the crime scene at Edenvale High School, where an armed robbery and shoot out took place. Two of the suspects died in the shootout with police, another one was injured.
Image: Alaister Russell

Children sent frantic messages to their parents‚ some from under their desks‚ while bullets flew during the traumatic robbery at Edenvale High School in Johannesburg on Thursday.

“My daughter was in the hall writing accounting when the shoot-out happened outside the hall and the robber‚ at one stage‚ tried to get into the hall‚” said one parent.

“Thank u to the brave teachers who held the doors closed. She sent me a message while hiding under her desk saying she loves me cos she thought she was going to die... She says she can’t get the gunshot sounds out of her head.”

Parents shared their anguish and the trauma experienced by their children on the school’s Facebook page. But mostly‚ they praised the teachers and staff for keeping their loved ones safe.

Police confirmed on Friday that a fourth suspect had been arrested. Two of the robbers were killed when confronted by police and security companies. A third suspect‚ who was shot in the head‚ was transported to hospital under police guard.

“[The] fourth suspect was arrested after he was found in possession of a rifle and pistol in Edenvale on Thursday afternoon. He was driving the white Volkswagen Polo which was used as a getaway vehicle in the robbery‚” police spokesperson Kay Makhubela said on Friday.

“I would just like to say that your children were incredible today! They were all so brave and I was blown away by the love and support they showed each other. I am proud to be part of the Edenvale High community‚” Stacey Viljoen posted on the school’s Facebook page.

Shots were fired at Edenvale High School in Johannesburg on February 21, 2019, during a suspected robbery. Two suspects were shot dead and a third was injured in the shootout that occurred around midday.

“Thank you for keeping our kids safe today‚ I have no words to express how grateful I am to all the staff. You are true heroes‚” said another parent.

“Thank You to Dr Harmer and his staff for getting our children to safety. I got to my baby girl and I held her so tight. Edenvale High treated the situation well‚” posted another.

Friday’s examinations were postponed to Monday. Although the school was closed on Friday‚ it was open for all pupils who needed counselling.

Shortly after the incident‚ an AK47 could be seen lying near the school gate. Three unlicensed firearms were recovered from the scene.

School principal Larry Harmer said the school was equipped with a lockdown system and a camera at the front gate. He said a man stopped at the gate‚ claiming he was collecting his child at the school.

“We opened the gate and‚ as soon as he got in‚ robbers in a second car tailgated him. We saw them coming on the camera‚ but by the time we were on lockdown they were in the front office.”

Harmer said the group of armed men jumped through the windows of the school’s reception area and demanded to be taken to the safe.

“They found no money in the safe. There is a smaller safe where we keep all of our cash and they didn’t even see it. They then went into the offices and tried to smash down my walls.”

The pupils were busy with exams at the time.

The armed robbers forced school staff to hand over R8‚000 in cash‚ which was saved for a school trip.

“It is becoming clearer and clearer by the day that we are becoming sitting ducks for criminals. Our schools are targets and we are exposing our children to incidents that we don’t have to‚” Lesufi said.

Norkem Park High School in Kempton Park became the second Johannesburg school to be hit by a robbery on Thursday afternoon.
News
2 years ago
Next Article