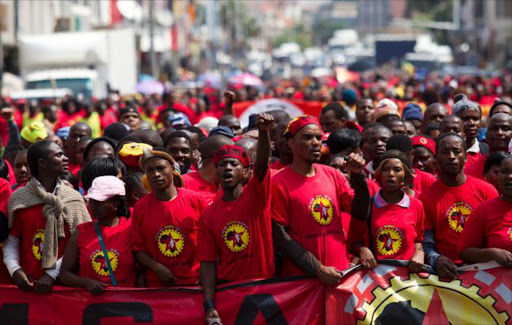 The National Union of Metalworkers of SA (Numsa) has slammed the minimum wage bill signed into law by President Cyril Ramaphosa on Friday.

“CEOs in South Africa are paid obscene amounts of money, whilst the workers, who create the wealth, earn peanuts. Workers will earn R20 per hour, whilst CEOs will be earning an average of R8,625,” said Numsa spokesperson Phakamile Hlubi-Majola.

She described the R20-per-hour amount as “shameful”, saying it would worsen the living conditions of workers.

“This is an indictment against the ANC government for failing to promote an agenda to genuinely improve and transform the lives of the working class,” Hlubi-Majola said in a statement.

“Cyril Ramaphosa has legalised slave wages and confirmed to SA corporates that it is OK to exploit African workers and pay them low wages.”

The national minimum wage bill is part of a package that includes amendments to the Basic Conditions of Employment Act and Labour Relations Act.

The law, which will come into effect on January 1 2019, is expected to benefit about 6-million workers who currently earn below R3,700 per month.

The minimum wage law, which was formulated at the National Economic Development and Labour Council (Nedlac), has been in the works since 2015, with parties agreeing to set the minimum hourly wage rate of R20 in 2017. Its initial implementation date was pushed from May 1 following a series of blunders during the bill’s drafting period.

In its initial response to the proposals, the National Treasury warned that the system would affect jobs and the economy in the long term if it were to be implemented recklessly.