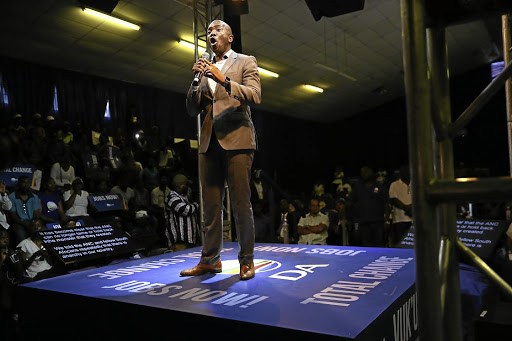 DA leader Mmusi Maimane says he will be forging ahead with plans to have the party confront the reality of racial inequality in spite of some of its senior leaders being uncomfortable with the approach.

Maimane made the vow a day after an internal debate over his reference to "white privilege" during a Freedom Day speech spilt over into the public domain.

City Press on Sunday reported that his statement sparked a heated debate during a recent DA caucus meeting in which high-profile party figures like chief whip John Steenhuisen and MP Natasha Mazzone openly challenged him. They apparently feared his reference would scare off the party's traditional voters.

The report was followed by a Twitter storm after Mazzone, in what appeared to be an attempt to explain her position, wrote of her "dark" immigrant father who arrived from Italy a poor man and "worked hard" to become successful. Her tweet was read by many as belittling the black experience.

Maimane yesterday, however, defended Mazzone, saying he believed her Twitter message was being deliberately misconstrued. He further praised her as having been the first white DA member to acknowledge that she benefited from being white.

He said his remarks at the Freedom Day rally were in line with decisions taken at the recent party congress where he was re-elected as leader.

"We have to fight for the excluded black people. I am forcing them [DA leaders] to change the organisation. Some are uncomfortable but I am forging ahead."

Asked if the latest row was not an indication that some in the party were now seeking that he be removed, he said: ". the party has endorsed my leadership by renewing my mandate. I have no worry of such, the project of bringing diversity to the DA and ensuring that we change our country so all can benefit, will be something I continue to fight for."

He said addressing the legacy of apartheid, which included salary disparities, access to health and education as well as lack of land ownership for the majority, remains a priority for him.