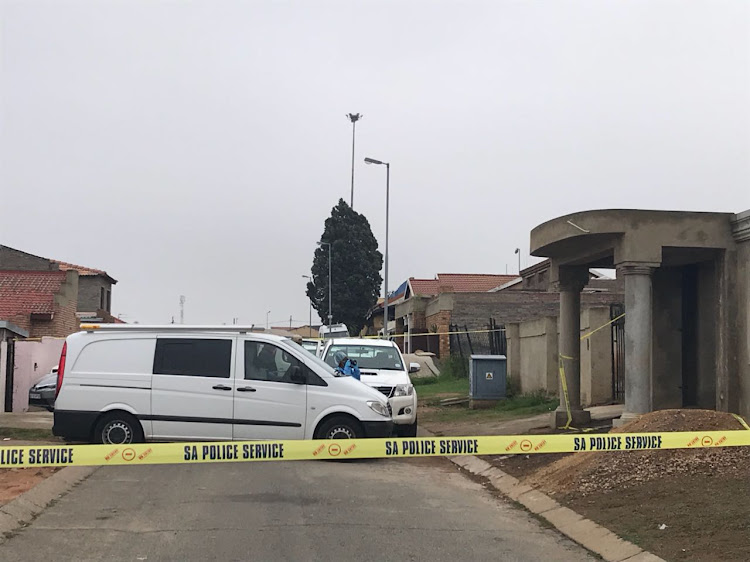 Police outside a house in Soweto said to be a drug den where drugs worth millions were found.
Image: TANKISO MAKHETHA

Residents in this part of Orlando West in Soweto mind their own business, walking through a police tape while dozens of forensic police officers comb the scene of a high walled house.

But the unsuspecting house within a tight knit community, according to police, is hidden a multi-million mandrax manufacturing laboratory.

Neighbours stood at their gates and leaned over their fences in hopes of getting a peep of the police’s discovery. The house is located less than a kilometre away from the home of the late anti-Aparthied activist Winnie Mandela where there has been a hive of activity since her death.

“We knew something was amiss with that house. We’ve noticed suspicious activities at the house, various cars could be seen there and on a few occasions we saw police there,” neighbour Nhlanhla Mthembu told Sowetan.

At least six packets of white powder – mandrax in powder form – could be seen at the entrance of the house while about three packets of mandrax tablets were carefully packaged and ready to be taken to a police laboratory for processing.

“We will be taking them to the labs to determine the quantity and their estimated value,” said one of the officers who is not authorised to speak to the media.

Every room in and outside of the house was covered with white powder floor and used for different stages of manufacturing the mandrax tablets. About 20 containers of precursors were found in one of the rooms, scales, plastic sealers, a machine that uses premixed substance to produce the drugs were discovered and confiscated.

Tebogo Moremi said the proximity of the house made it easy for their children to gain access to drugs and fall prey to addiction.

“We’ve complained about it to the police almost a year ago but nothing was done. Our kids might fall victim and become drug addicts,” Moremi said.

“We heard the police arriving at around midnight, banging the doors while gaining access to the house. We didn’t know what was happening and chose to remain indoors,” Moremi said.

Although no arrests were made, National Police Commissioner Khehla Sitole said this drug bust is part of an ongoing turn-around strategy by the crime-intelligence unit in a bid to tackle crime.

“This was a proactive crime intelligence-driven operation. We have decided, in terms of the approach of dealing with drugs. The members worked very hard in gathering information about a house where drugs were being manufactured. The response that you see is part of the intelligence used by the police,” he said.