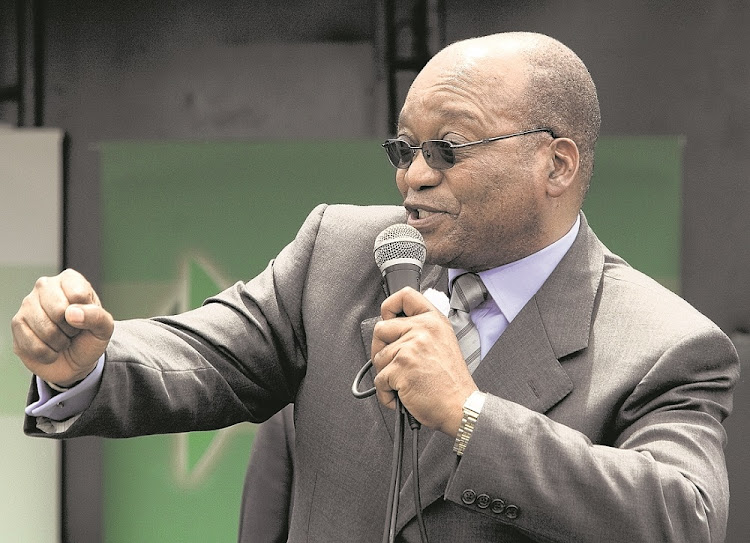 Jacob Zuma singing outside court after The Friends of Jacob Zuma Trust had called on his supporters to picket outside the Johannesburg High Court when he appeared to face a rape charge.
Image: Greg Marinovich. Circa 2005. © Sunday Times.

Speaking to Morning Live on SABC on Monday‚ Sexwale said Zuma had been given an opportunity to hold various positions in the ANC and should cooperate with the party.

“President Zuma‚ from being a child‚ never had a chance‚ because of the situation in this country‚ even to go to school. But he was educated the ANC way. From those days until we have put him where he is today‚ people have to show gratitude and say thank-you to the people‚” Sexwale said.

“Show that you appreciate what we have done. President Zuma‚ out of the top six positions‚ he is the only person in history who has occupied most of those positions – deputy secretary general‚ national chairperson‚ deputy president and now president.

“No person in the history of the ANC has occupied all those positions. It shows love‚ respect and adoration. It was not because he was a top doctor or top lawyer. This is the man who educated himself inside the ANC. [From] the most disadvantaged [background] Nkandla [with] nothing. The first school there was built by myself.”

Sexwale was speaking as the national executive committee of the ANC was expected to decide Zuma’s fate after protracted negotiations failed to force him to vacate office. Sexwale said Zuma was at the door and it was time for him to go.

“If we take you from those levels and put you up there‚ show appreciation. It is time now that he must go. I had said last time [that] his bags are packed. He is in the departure lounge. Those bags can be bags of luggage or baggage‚” Sexwale said.

Sexwale said ANC president Cyril Ramaphosa was the best man to take the country out of the political instability it is facing.

“The nation must get out of the morass. The wound must be cleaned out. We would like to say‚ especially on the meeting that will start today‚ let the healing begin.

“We have been having a hard time. Let the country get out of this political instability and uncertainty and let the economy begin to roll out … He is the right man‚ with the right temperament‚ but he will need people [to support him].”

Sexwale lamented the postponement of the state of the nation address and also the cancellation of the NEC meeting‚ which was supposed to take place a week ago.

However‚ he commended Ramaphosa for the “astute” way in which he had handled the transition. He described Zuma’s leadership within the ANC as “a long‚ beautiful history but spoiled at the last moment”. He said the decision to complete the transition was imperative.

“The transition might be peaceful and steady‚ but it might be painful also. Because this is telling somebody [that] your time is up when somebody should have known by himself that his time is up.”

While talks between President Jacob Zuma and the ANC’s top six continue over his exit from the Union Buildings‚ his fifth wife Thobeka Madiba-Zuma ...
News
3 years ago

President Jacob Zuma has, for the past two years, shown his true colours according to Cosatu.
News
3 years ago

'We were going to fire Zuma after Wednesday's NEC meeting' - Mashatile

The ANC had planned to dump President Jacob Zuma as the head of state after Wednesday night’s now-cancelled national executive committee meeting.
News
3 years ago

ANC President Cyril Ramaphosa has told the party’s MPs that he is not negotiating any deal to protect state president Jacob Zuma from prosecution ...
News
3 years ago
Next Article