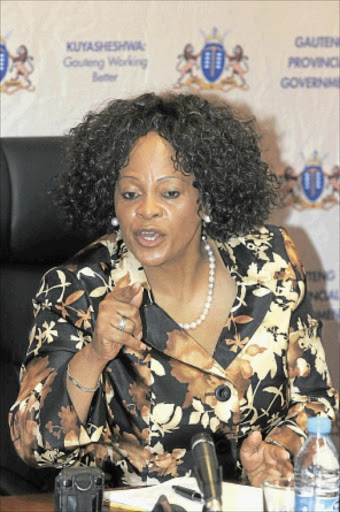 Cape Town’s use of the term “Day Zero” came under fire from water and sanitation minister Nomvula Mokonyane in Parliament.

The minister was briefing the portfolio committee on water and sanitation on Wednesday.

She said that the drought would be declared a national disaster after information had been collected about how it was affecting all nine provinces. The announcement could take place on February 14.

Stressing that the drought was affecting other parts of the country‚ she said some areas in the North West have not had water in three years.

“Day Zero” – a term used by the city to describe when most taps will be turned off to conserve its remaining supplies of water – was a phenomenon that had not been declared by the National Disaster Management Centre‚ said Mokonyane.

The department maintained that Day Zero would not happen as there were interventions in place.

“It’s not us who have said there is Day Zero… We do not understand how some people‚ somewhere‚ decided to talk of Day Zero. It is not us‚” she said.

The portfolio committee said in a statement that it would “look at policy to review the issue of water licences and the ownership of dams through proposed legislation.

“Currently‚ the department of water and sanitation owns and manages about 330 out of the 5‚000 dams in South Africa. It concerns the committee that 65% of water goes to agriculture whilst 23% is used for domestic consumption.

Pastor Mboro has called on South Africans to join him in a 90-day prayer for rain in Cape Town.
News
4 years ago

“As recent as (Tuesday)‚ water was released by farmers which was viewed ‘as a gift’ to the people when in fact water is a natural resource which must be freely enjoyed by all. The government must look at expropriating the land where the dams are so that they become national assets.”

BusinessLIVE reported on Wednesday that the Democratic Alliance (DA) was seeking an undertaking from Mokonyane that the agricultural sector would stick to its water allocation and not dip into supplies intended for drought-stricken Cape Town.

Cape Town has imposed strict water restrictions‚ limiting residents to 50 litres per person per day in a bid to stretch its dwindling reserves.

DA leader Mmusi Maimane said: “Day Zero still remains a possibility and defeating it will require a collective effort from households‚ businesses and all three spheres of government.”

The city has its sights set on turning off most taps and asking residents to queue at collection points for a daily allocation of water from around May 11.

Cape Town deputy mayor Ian Neilson said that by January the agricultural sector had drawn down its full allocation for the 2017-18 hydrological year from the Western Cape water supply‚ while the city had used just a quarter of its allocation in this period. The hydrological year begins in November.

“Our concern is the 174.7-million cubic metres allocated to us‚ and whether the national minister will ensure we get it‚” said Neilson.

Agriculture had been allocated 58-million cubic metres of water‚ he said.

Mokonyane should publicly guarantee that Cape Town would get its full allocation‚ and that none of it would be given to other municipalities or agriculture.

“It is vital for managing the year [ahead]‚” he said.

On the road with Cape Town's 'water police'

The convoy of law enforcement vehicles had barely caught his eye when a nervous car-washer dropped his bucket of soapy water.
News
4 years ago

As Cape Town officials scoured the city on Thursday to ensure residents were meeting new‚ strict water-use quotas‚ they made a worrying find .
News
4 years ago

Government and the National Consumer Commission are being urged to rein in traders who are hiking the price of bottled water.
News
4 years ago

WWF SA answers some of the most common questions about safe water as Cape Town counts down to April 16.
Good Life
4 years ago

The last time we had proper rains in most villages around Giyani was in 1993.
Opinion
4 years ago
Next Article