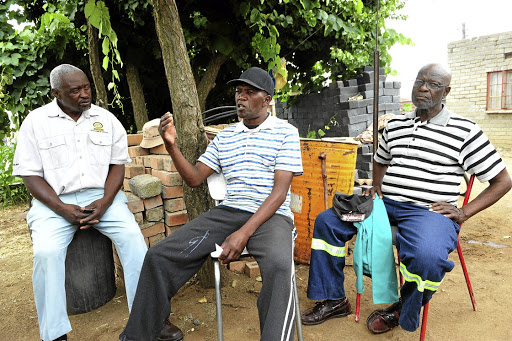 Piet Mokoena, Meshack Ncongwane and Joseph Mofokeng are some of 82 people who were supposed to have benefited from a state-sponsored dairy farm in Vrede. /Veli Nhlapo

Meshack Ncongwane thought that by now he would be on the cusp of retirement as a dairy farmer who led from the front to secure his community a life-changing project.

But the 61-year-old's life plans have been shattered together with 81 others who were set to benefit from the collapsed Vrede Dairy Farm project, whose R220-million capital was looted.

Yesterday, a crestfallen Ncongwane told Sowetan he waited for a life-changing call on the project that never came.

"It's been a long wait. Others kept visiting the mayor's office over the years, trying to find out what's happening," said the resident of Thembelihle township in Vrede, Free State.

He was speaking for the first time since details of how hundreds of millions of public funds meant to fund their project were looted, allegedly by companies and people linked to the controversial Gupta family.

Last Thursday, the asset forfeiture unit of the National Prosecuting Authority (NPA) obtained a preservation order on properties and assets of Gupta associates who allegedly laundered money stolen from the dairy farm project.

The order, however, is little consolation to Ncongwane and his fellow budding farmers who blame Mineral Resources Minister Mosebenzi Zwane - ironically their Vrede homeboy - for their misfortune.

Zwane was MEC for agriculture in Free State when the project was undertaken.

Ncongwane said Zwane owed them an explanation as he "started the whole thing".

Estina‚ the company that ran the Gupta-linked Vrede Dairy Farm Project had only R9‚000 in its bank account.
News
4 years ago

He recalled how the minister made promises to him and other aspirant dairy farmers at the local town hall in 2012.

Reflecting on letters he had written to the local municipality a year earlier requesting land to start the dairy farm, Ncongwane said his request was declined due to lack of financial support.

"Zwane explained to us that they wanted black farmers who government would fund ... they wanted people who had cows already," he said.

"We were told to even sell the cows we already have because the project would be fully funded and there would be dairy cows at the farm."

Piet Mokoena, 64, an intended beneficiary, said: "I've long given up hope; our names have been used to steal from government."

ANC secretary-general Ace Magashule said: "We have adopted a resolution that we must fight corruption. That matter is with the NPA. [The ANC] stance [is] that we need to fight corruption when it rears its ugly head.

"We treat the Vrede Dairy in that way."

Zwane is seen as a close Gupta associate after he flew to Zurich to help negotiate the family's acquisition of Optimum Coal Mine.