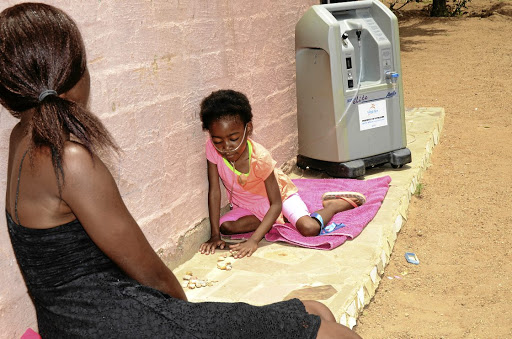 Onkarabile Mamorobela can't breathe without being attached to a big oxygen machine that uses R500 worth of electricity a month. / Mduduzi Ndzingi

An oxygen machine is both a blessing and a burden for a six-year-old girl.

Onkarabile Mamorobela from Hammanskraal north of Pretoria has to stay hooked to it to aid her breathing due to chronic respiratory illness.

Onkarabile's unemployed mother, Tumelo Mamorobela, 26, is concerned that her daughter will not be able to attend classes when schools reopen next week.

"I'm frustrated because I haven't found a school for her and I have no idea what will happen when schools open next week," Mamorobela said.

Onkarabile is supposed to start Grade 1 this year after she stopped attending school last-year in October when her breathing became worse.

When Sowetan arrived at the family's home yesterday, Onkarabile was standing at the door in a pink outfit watching other children play outside.

"The machine is too big and she has to move around with it wherever she goes. Even going to the hospital for check-ups is a problem because we have to hire special transport which costs us more money."

Mamorobela said Onkarabile started experiencing breathing problems as a baby but her condition worsened over the years.

"She coughs a lot and struggles to breathe," she said.

Mamorobela said doctors put Onkarabile on the oxygen machine when tuberculosis treatment failed but Onkarabile cannot run around and play with other children.

"She becomes distressed and runs out of breath. She longs to go outside and play with other kids which breaks my heart. I can see that my child is suffering," she said.

Mamorobela uses an electrical extension cord which allows her daughter to sometimes sit outside in the shade, under the tree, and get some fresh air. Sometimes they sit together on the stoep and play a game of diketo.

Onkarabile's condition has also put a strain on the family's income as Mamorobela was forced to quit her job at a textile factory to look after her daughter.

"We are really struggling. The machine uses up a lot of electricity. When I get money, the first thing I think about is getting electricity because my child needs it to breathe. When we start running out of electricity I start to panic."

Mamorobela said she tried to make an application for a care dependency grant which was rejected.

Efforts to find a special needs school for Onkarabile through the help of a concerned community have also not been successful.