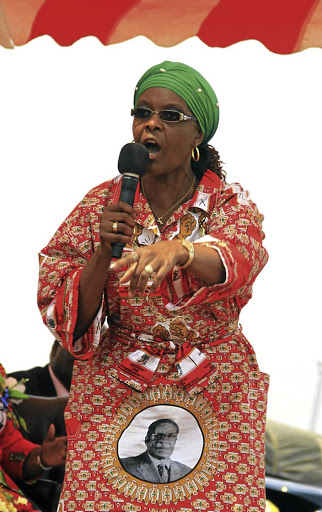 Zimbabwe's first lady, Grace Ntombizodwa Mugabe is unlikely to seek refuge in South Africa should her embattled husband Robert Mugabe be ousted from power, despite her strong links with SA.

Grace, who was born in Benoni on Gauteng's East Rand 52 years ago, is rumoured to be the owner of a R45-million mansion in the affluent northern Johannesburg suburb of Sandhurst.

The couple's eldest son Robert Jnr, 25, is an architecture student at the University of Johannesburg. Their younger one, Bellarmine Chitunga, 21, is also based in SA.

It is likely then that should she seek refuge from a Zimbabwe that is no longer hospitable to her, she might consider moving to the country of her birth and a place where she spent part of her childhood. After all, it is probably the only place in the region that can indulge her penchant for expensive shopping sprees.

The only thing that militates against that decision is the fact that she could face prosecution for assaulting young model Gabriella Engels at a Sandton hotel in August. Both the DA and the Afrikaner interests lobby group AfriForum have mounted a challenge to the government's decision to grant her immunity, which allowed her to leave the country after the alleged assault.

David Munyae, a political analyst based at the University of Johannesburg, said the Zimbabwean first lady was unlikely to settle in South Africa as she wouldn't want to attract a lot of attention to herself.

Munyae said a more likely scenario was for Robert Mugabe to negotiate to be granted the status of a former president and the perks that come with it as part of his exit package, including security privileges and a diplomatic passport. That will allow the first family to remain in Zimbabwe and still be free to travel.

That view was echoed by Derek Matyszak, a Zimbabwe-based research consultant at the Institute for Security Studies, who said Grace Mugabe was likely to remain in Zimbabwe if her nonagenarian husband was accorded the honour of an elderly statesman.

He said if the former liberation fighter's health faltered, then his younger wife might have to choose to settle in one of the family's "nests" in places like Hong Kong, the United Arab Emirates and SA.

The Mugabes reportedly own a R130 million mansion in Dubai in the same upmarket area where President Jacob Zuma is said to own a "retirement home".

Emigration from Zimbabwe is soaring as ordinary residents despair at the imploding economy and political instability.
News
4 years ago

The Zimbabwean embassy has withdrawn an application to intervene in the matter between South African model Gabriella Engels and Zimbabwean First Lady ...
News
4 years ago

Grace Mugabe 'back in Zimbabwe'

President Robert Mugabe flew back to Zimbabwe in the early hours of Sunday accompanied by his wife Grace‚ reports the Zimbabwe Broadcasting ...
News
4 years ago

A waitress suffered a miscarriage after she was pushed by Robert Mugabe jnr as he fled his mother Grace Mugabe’s violent attack at a Sandton hotel on ...
News
4 years ago
Next Article