Eskom inquiry can go ahead as it sees fit 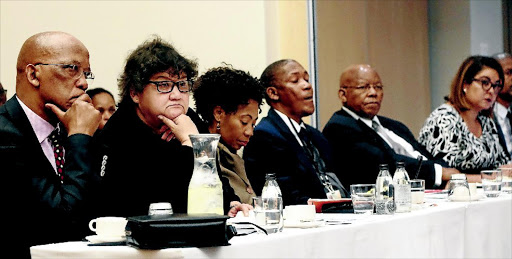 MPs from across the political spectrum have hit back at the office of the state law advisor‚ accusing it of not understanding the constitutional mandate of parliamentary committees.

This comes after external legal opinion from a prominent senior counsel confirmed that the public enterprises committee had wide-ranging powers to determine how it conducted its inquiry into the capture of Eskom.

The legal opinion from legal eagle Advocate Win Trengove SC was sought by parliament after the Eskom inquiry committee and its evidence leader Nthuthuzelo Vanara received letters from the Public Enterprises ministry and from the office of the state attorney law advisor.

The letters have been regarded as acts of intimidation and contempt of parliament by MPs.

Brown and the state law advisor had questioned the legitimacy of the inquiry and Vanara's fitness to lead the inquiry‚ claiming he had been conflicted as an employee of parliament.

Earlier in the day‚ MPs on the committee passed a motion of confidence in Vanara after the ministry raised similar issues in media statements on Tuesday.

Trengove's opinion indicated that the committee had “wide and open ended” powers to set up their inquiry in whichever way they deemed fit‚ as long this was done in a procedurally rational manner.

Lynne Brown allegedly intervened at the request of the Guptas to prevent the suspension of Matshela Koko.
News
4 years ago

Brown had also claimed that ongoing court cases and investigations around state capture would be affected by the inquiry. But Trengove has stated that the committee's role was only to inquire‚ and since Gordhan did not perform a judicial function‚ he was not subject to any requirements of impartiality.

He said there was no rule that stated Parliament could not investigate matters currently before the courts and that other investigations would not be impacted by the committee's work.

ANC MP Mondli Gungubele said the letter from the state attorney was “embarrassing”.

Gungubele said this was also proof that cabinet ministers "were not used to this level of rigour by parliamentary committees". DA MP Natasha Mazzone said the executive was accountable to Parliament and “not the other way around.”

Mazzone said the state attorney's letter was “appalling and deeply disturbing” in its lack of understanding of the law.

She said the state attorney's letter was riddled with spelling and grammatical errors.

EFF MP Thembinkosi Rawula said Brown must “chillax” as the committee was proving to be “on the right course to protect the public purse”.

Vanara said he had responded to the letter rejecting the claims “with the contempt they deserve” and “invited them to lay the complaint with the council of the bar.”

The committee resolved to write to the state attorney's office to register their concerns.