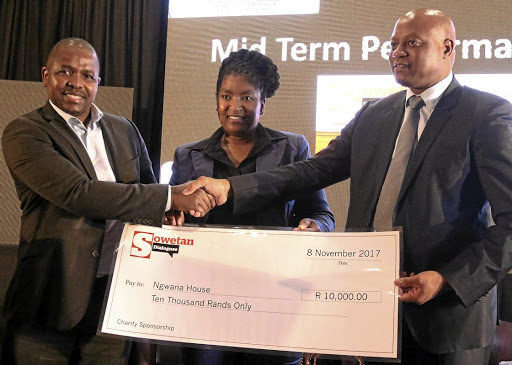 The Limpopo provincial government has promised a matric pass rate of at least 80% this year.

The commitment was made by MEC for education Ishmael Kgetjepe during the mid-term performance review in partnership with Sowetan at Meropa Casino in Polokwane on Wednesday night.

Speakers at the event, which was the first of its kind in the province, included MEC for economic development, environment and tourism Seaparo Sekoati and Sowetan and Sunday World editor-in-chief Philani Mgwaba.

The commitment followed a decline in the Grade 12 pass rate over the past few years.

"It is a target that we have set ourselves. We will account in January if we're not able to achieve it," said Kgetjepe.

The province is known for producing top maths and science pupils. It produced the highest number of top performers in the country last year, with 12 of the top 22 from the province. The top achievers were from Dendron High School, Mbilwi Secondary and Rivoni School for the Blind.

"I think we can do better than we are doing," Kgetjepe said.

Sekoati echoed Kgetjepe's sentiments, reinforcing the target of at least 80%.

Political analyst Lesiba Teffo said it was important that the province invest in education.

KZN matrics under police guard as they write their exams

Matric pupils at a rural KwaZulu-Natal school are writing their exams under police guard.
News
4 years ago

Mgwaba described Limpopo as an important province for Sowetan.

"It is important for us to play our role. We thank the province for the role it plays in our lives as a business," Mgwaba said.

He handed over a cheque of R10000 to Ngwana House, based in Fauna Park in Polokwane, which looks after abandoned children and orphans.

Sekoati thanked Sowetan for affording the provincial government an opportunity to share with its citizens the mid-term performance.

"You should be able to tell us if we are still on track to creating a better life for our people or whether we have taken an off-ramp from our developmental agenda," he said.

He also told guests that the province was an awakening giant. "We will make this province a place where people will be proud to live."

Self-styled king of kwasa-kwasa and die-hard ANC supporter Malo-A-Botsheba lamented the fact that tenders were only given to people with political connections in the province. He asked Sekoati what people like him should do to get government contracts.

Top-performing matric pupils from over nine schools around Vuwani in Venda were yesterday gathered in one classroom to prepare for today's maths ...
News
4 years ago

'Passing Grade 12 is a ticket out of poverty'

It has been a difficult journey to matric for Bafana Nyongwana of Vosloorus, Ekurhuleni, who will sit for his final examinations this week.But the ...
News
4 years ago

It will be more difficult for pupils writing their final matric exams to cheat this year as tight measures are being implemented to prevent any ...
News
4 years ago

As Gauteng education MEC Panyaza Lesufi was preparing to visit a Mamelodi school in Pretoria on Monday to attend to a second incident of alleged ...
Good Life
4 years ago
Next Article