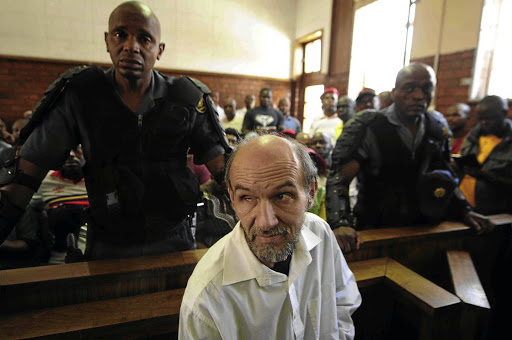 Willem Kroukamp appeared in the Bronkhorstspruit Magistrate's Court yesterday on charges of rape, assault and kidnapping of a domestic worker.
Image: THULANI MBELE

The 45-year-old Kroukamp, who is accused of raping the domestic worker and forcing her to perform sexual acts with dogs, appeared in the Bronkhorstspruit Magistrate's Court where he abandoned his bail application, citing issues of his own safety.

He is facing 10 charges including rape, malicious damage to property, kidnapping and sexual assault.

Chief Mandla Mandela has come out in support of his sister‚ Ndileka Mandela‚ who bravely revealed that she had been raped five years ago by a ...
News
4 years ago

Former president Nelson Mandela’s eldest granddaughter has joined a growing list of women around the world who have bravely exposed falling victim to ...
News
4 years ago

Ndileka, who also recently joined #MeToo global social media campaign and revealed that she was raped by her partner, said the 41-year-old woman needed all the support she can get. The global campaign encourages victims to disclose abuse.

"I'm here to support the victim. As you know, last week I came out after being raped by my partner," said Ndileka.

She said she could see that justice was taking its course in the case as the accused will not be roaming the streets.

She said it was saddening that 24 years into democracy, there were still pockets of racism towards women. "Nobody deserves to be raped, and rape is not a stigma," she said.

Ndileka said she was happy that the state has prepared 10 charges against Kroukamp.

"My advice to every rape victim is, please, find someone to talk to, and report to the police because being raped is not our fault," Ndileka said.

Yesterday, it emerged that two of the nine dogs that were allegedly used in the sexual assault of the woman were removed by the National Society for the Prevention of Cruelty to Animals.

In a patriarchal society like South Africa‚ men‚ according to experts‚ often exploit their power‚ whether it is financial‚ political or physical‚ in ...
News
4 years ago

Jennifer Ferguson‚ who joined thousands of women from across the globe in disclosing their abuse as part of the social media #MeToo campaign‚ says ...
News
4 years ago

The society's regional spokesman in Tshwane, Inspector Andrew Kekana, said: "We received a warrant from the police to remove, specifically two dogs, to a place of safety until further investigations are completed.

"We were told that those two dogs were involved in bestiality with a female person."

The lawyer of Kroukamp, Ehlekatani Maluleke, tried unsuccessfully to prevent pictures of her client from being taken in court.

"If he gets photographed, the pictures will affect his life even after the matter has been finalised," she said.

But Magistrate Ignatius du Preez allowed the media to take pictures, saying the community in the gallery already knew the accused.