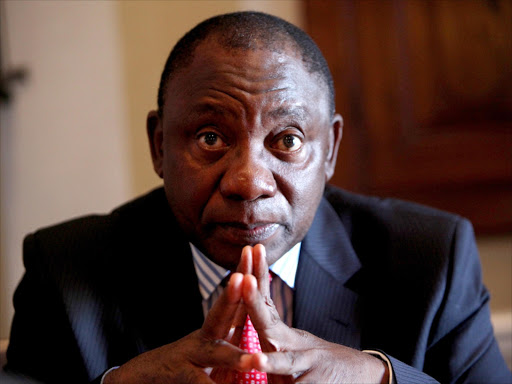 Responding to questions in the National Council of Provinces on Wednesday‚ Ramaphosa said he hoped this was the last time any citizens saw the need to hoist the old apartheid flag to try to register any form of unhappiness.

Ramaphosa said the conduct of those who took part in the Black Monday campaign did a disservice to the concerns they were raising.

"I also condemn those who participated in the march where they flung out the old South African flag‚ if they did anything they actual damaged their own case because by hoisting the old South African flag they demonstrated to all and sundry in our country that they still hanker for the old days of apartheid‚ that they are still trapped by the racist past that we thought we had moved away from and that should be condemned.

The African National Congress (ANC) has condemned the display of the apartheid South African flag during nationwide protests against farm murders ...
News
4 years ago

"Anybody who still hoists a flag that is representative of a terrible crime that was committed against our people‚ a crime that the world called a crime against humanity should be condemned very strongly and I'm hoping that that flag will never be flown in South Africa ever again and this must be the last time we've seen that flag‚" said Ramaphosa.

The deputy president said farm workers were as vulnerable to crime and violence as farm owners were.

"I want to call on farm owners to stop violating the rights of farm workers and I call on our law enforcement agencies to be a lot more vigorous on this."

Turning to questions on his responsibilities as leader of government affairs in parliament‚ Ramaphosa said he has had a one-on-one meeting with social development minister Bathabile Dlamini about her recent no-shows at meetings of the oversight committee on the looming social grants crisis.

He said he was confident that the matter would be resolved by the minister through working with relevant parliamentary structures such as the social development portfolio committee and the standing committee on public accounts.

Ramaphosa reminded MPs that the constitution and the rules of the national legislature gave them powers to sanction ministers showing it disrespect.

The social development committee and SCOPA on Tuesday gave Dlamini‚ the Post Office and the SA Social Security Agency until the end of business on Wednesday to find a solution to the social grants impasse.

Dlamini and Sassa have five months to find a new distributor of social grants following a Constitutional Court order that nullified their contract with Cash Paymaster Services.