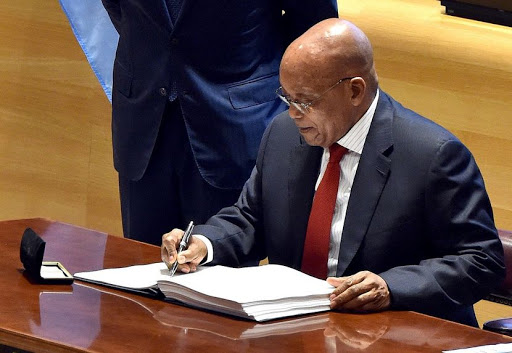 President Jacob Zuma of the Republic of South Africa signing the Treaty on Prohibition of Nuclear Weapons on the sidelines of the United General Assembly (UNGA72). / DIRCO

President Jacob Zuma has denied allegations contained in journalist Jacques Pauw’s new book that he has failed to submit his tax returns for a number of years.

In the book‚ titled The President’s Keepers‚ Pauw claimed Zuma failed to submit a tax return for his first four years in office. Pauw also claimed that for a few months into his presidency Zuma was paid R1m a month by a security company.

Pauw also claimed Zuma owed millions of rand in tax on the fringe benefits because of upgrades at his Nkandla homestead.

If allegations made against Zuma are true‚ it could pave the way for a new bid to remove the president from office.

The Constitution states that the National Assembly‚ by a resolution adopted with a vote of two thirds of its members‚ may remove the president on the grounds of a serious violation of the Constitution or the law‚ or serious misconduct.

He said Zuma had declared to the relevant authorities all income received.

“Allegations contained in the reports are misleading and are clearly part of the ongoing smear campaigns. The tax matters of the President are in order‚” Ngqulunga said.

Although Dlamini-Zuma did not directly respond to these allegations‚ the ANC Women’s League issued a statement saying Dlamini-Zuma had had no clandestine or dodgy relations with anybody throughout her political career.

“Dr Dlamini-Zuma has nothing to hide‚” the league said in a statement.

The Umkhonto we Sizwe Military Veterans Association (MKMVA) described the report in the Sunday Times as fake news.

The Democratic Alliance said the current ANC has a colourful history of associating with questionable business people‚ who fund both Zuma’s lifestyle and the ANC.

“Nkosazana Dlamini-Zuma is showing that if she were to be elected to lead the ANC‚ she will continue where Zuma left off‚ by engaging in corrupt acts and extending patronage to dodgy individuals‚” DA spokeswoman Phumzile Van Damme said.

Van Damme said the party would assess all allegations made in the book and decide a way forward for each.

United Democratic Movement leader General Bantu Holomisa said it was a pity that the whenever Zuma was fingered in allegations of wrongdoing‚ the ANC would instead “lionise him” as a hero.

“This is bad for the rule of law in South Africa. Every week the president is embroiled in scandal after scandal. If the allegations are true‚ the ANC must deal with their man‚” Holomisa said.