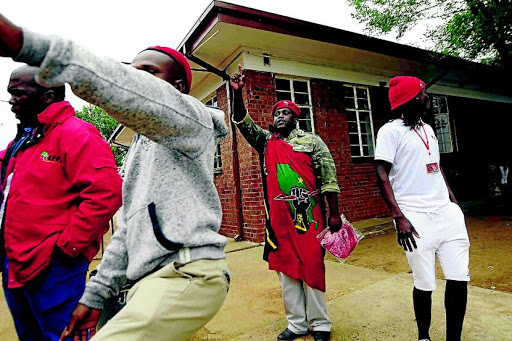 EFF supporters protest outside the Bronkhorstspruit Magistrate's Court in support of a domestic worker who was allegedly raped by her employer's 45-year-old son. /Thulani Mbele

Police are apparently investigating explosive allegations that relatives of a Bronkhorstspruit man accused of raping his parents' domestic worker used to hire prostitutes to perform sexual acts on their dogs.

Yesterday, the 45-year-old man accused of raping the domestic worker appeared in the Bronkhorstspruit Magistrate's Court where he faces seven charges. The charges, include three counts of rape, kidnapping, three counts of sexual assault and malicious damage to property.

Neighbours told Sowetan how the man was an alcoholic who physically abused his parents as well.

He allegedly repeatedly raped the 41-year-old domestic worker before forcing her to perform oral sex on two dogs.

The alleged incident took place at the man's parents' house on Monday.

Vavi said the victim was so traumatised and appeared to be disoriented.

"We're trying to find counselling services to get her to cope with her ordeal," Vavi said.

"She escaped by spraying the eyes of the fellow with toilet spray only to find the gate locked. Her screams alerted the neighbour who called police - she was naked."

According to a neighbour, the alleged rapist is an " alcoholic who abused his parents physically".

"What he did was horrible," she said. "The father of the accused said I should call the police and I did.

"Before the cops could arrive, the man started beating his parents and the fight was broken up by police when they arrived." The neighbour said she had never spoken to the victim before but had seen her twice prior to the incident.

The accused's father, who was in court, said he was also shocked like everyone else by his son's actions.

Prosecutor Tiisetso Leballo said the alleged rapist had "kidnapped" and "locked her in a room". He also allegedly broke her cellphone.

SA Human Rights Commission's Sam Sibanyoni said they would probe the alleged enforced sexual act with the dogs. "To force a person to sleep with a dog is a gross violation... And we are of the view that such acts are racially motivated."

Sibanyoni said their preliminary investigation revealed that the domestic worker was employed three months ago by the suspect's mother. "She would work once or twice a week and was paid R150."