'Passing Grade 12 is a ticket out of poverty' 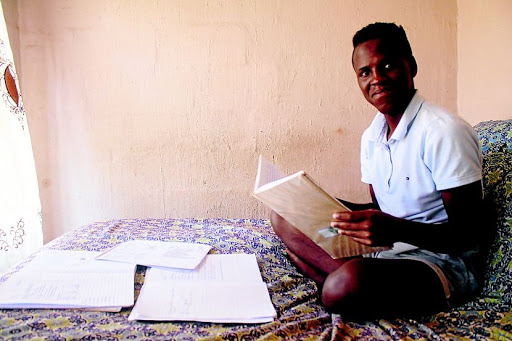 It has been a difficult journey to matric for Bafana Nyongwana of Vosloorus, Ekurhuleni, who will sit for his final examinations this week.

But the 20-year-old from Masithwalisane Secondary School hopes the start of exams will be the first step out of poverty and misery.

"My mom passed away two months after I was born. I was raised by my grandmother Annah who is 73, and it has not been easy for us because she had many mouths to feed," he said.

"The last time I had new school trousers was when I was in Grade 8. My grandmother just patches them when there is a need. I was lucky to get a jersey for matric this year from a friend."

"We all survive on my grandmother's pension. Things became worse when my aunt lost her job last year. I want to make my family proud by bringing home the matric certificate. I also want to be a role model to my younger cousins."

Nyongwana did not do well during preliminary exams because he had to wait for everyone to sleep before he could study.

He has since joined a study group for the final exams. He recently returned from a study camp in Vereeniging after his grandmother borrowed R750 to pay for him.

One of the neighbours, Nthabiseng Motsei, tweeted: "I learnt that Nyongwana is going away on a school trip but has no money for lunch. My mom and sister ransacked the pantry and brought snacks and fruit.

"Toiletries were brought from [other] people's houses, and some came with blankets and decent clothes."

Nyongwana said he was touched by this gesture and was encouraged to work even harder to pass matric.

" I pray to God to give me the energy to study hard so that I can take my family out of this situation."

Hardship fails to put a damper

Themba Khosa, 17, has always dreamt of becoming a lawyer but financial constraints have put the breaks on his ambition for now as he prepares for matric exams.

Khosa, a Grade 12 pupil at Vuwani Secondary School in Chiawelo, Soweto, sits for his first paper tomorrow with hundreds of thousands other matric hopefuls.

Khosa, though, has to deal with the fact that he will not be able to study law at university because he could not afford to pay the university application fee.

"I could not apply because I could not pay the application fees," he said, "however, I have applied to study teaching at Rosebank College. I hope to get aid from the National Student Financial Aid Scheme.

"My mother passed away in 2007 and it has been a bumpy road for me and my brother. Education is the only thing that will take us out of this situation."

Khosa lives in a shack in Protea South with his brother. The shack has holes and the floor is bare. There is not much furniture except for a double bed and a mattress.

There is a small round table in the middle of the shack which Khosa uses for studying at night. He said there are times when they don't have electricity and he has to use a paraffin lamp for studying.

"Sometimes I have to use my cellphone torch to study at night when we don't have paraffin," Khosa said.

However, he said he was ready for the exams because he bought study guides from people who wrote their's last year. - Yoliswa Sobuwa