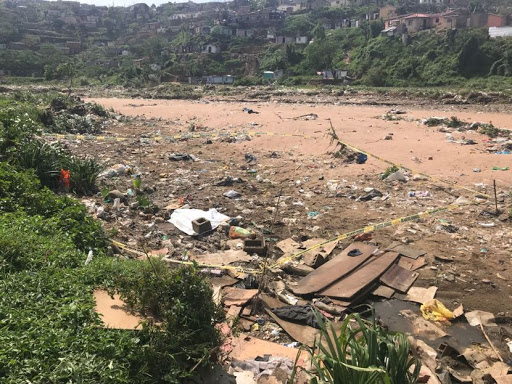 Okuhle Kweyama’s body lay frozen on the banks of the Mfungosi River which weaves through Umlazi’s E-Section. It was in the mud‚ amid litter and flood debris‚ that the nine-day search for the toddler drew to an end on Thursday.

And now‚ her mother says‚ she can try to find peace.

“It hurts but I am glad they found her‚ because it was very painful knowing that they had found others but not my child. There isn’t much I can do now but accept that she is gone and try to move on‚” Lindokuhle Kweyama said.

Okuhle’s tiny frame was unearthed by police rescue divers and gently carried to the steps of a nearby house‚ where her father confirmed the identity of his child. She was found by E-Section resident Clifford Skwebela‚ three kilometres from where she disappeared.

He had woken early to boil water for his children to bath before they went to school.

“My neighbour called me and showed me where the child was. I could see the legs and the bum [protruding from the mud]…this thing is so sad‚” he said.

Skwebela had left his home and driven to the police station to report his grim find.

The toddler was washed away when the river near her crèche in Umlazi D-section overflowed during a storm that ravaged KwaZulu-Natal last Tuesday.

She had been pulled from the rising waters and placed on an embankment by a passing schoolboy. But as the scholar returned to rescue other children from the crèche‚ the toddler was washed away by the torrent.

Kweyama was the last among 16 people reported missing during the storm and ensuing floods which ravaged the city last week.

The toddler‚ in her blue fleece cardigan with pink buttons‚ had been the focus of a broad police search which saw them combing kilometres of river from the point where she disappeared.

Damage from the extreme weather is expected to run into the billions‚ with crucial state infrastructure like hospitals and schools damaged by heavy rains and driving winds.

The discovery of her body came as the eThekwini Municipality held a mass memorial service for those killed during the storm. At the memorial‚ mayor Zandile Gumede said she hoped the families would find the strength to deal with their tragedies.

“We are here as citizens of the eTthekwini region to pray for you. We are here to humble ourselves before you and say that we feel your pain‚” she said.