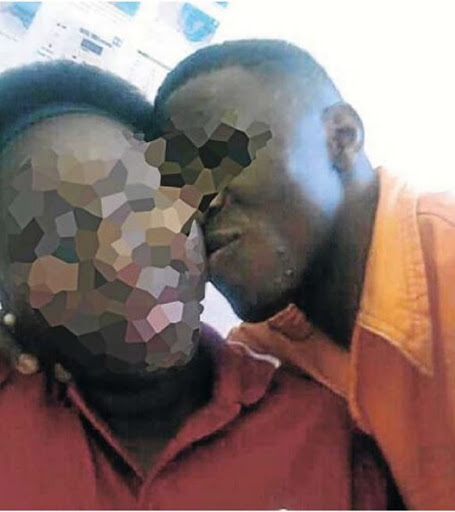 The inmate whose picture of a kiss with a prison warder went viral this week is here seen cosying up to another woman in the same prison.

A North West inmate with a penchant for selfies has landed yet another woman in trouble after he snapped himself in his prison uniform planting a kiss on a woman's cheeks at a facility where he is serving time.

The same prisoner was at the centre of a storm this week after a series of selfies he took with a female prison warden at Losperfontein Correctional Centre near Brits led to her committing suicide on Monday.

The images of the warden and the prisoner - who officials refused to name or to say what he is serving time for - went viral on social media.

The warden allegedly committed suicide inside the prison's staff quarters where she lived after her intimate pictures with the inmate were made public.

The Department of Correctional Services had just launched an internal investigation into the images.

Now it has emerged that another female employee at the same facility working for a company providing chronic medication to prisoners lost her job this week after selfies with the same prisoner surfaced.

Department spokeswoman Tshidi Mapole said the investigation on the latest images was still under way.

The prisoner has now been moved to the Mogwase Correctional Services Centre as the department investigates circumstances surrounding his selfies with the two female employees.

Mapole confirmed that the woman appearing in the latest images had her services terminated this week after an agreement was reached with her employer.

"The offender has not been charged but was moved ... to allow the investigation into the matter [to continue] without hindrances."

The latest series of selfies, which also appear to have been taken by the said inmate, showed him posing with the woman, yet to be identified, who works for a company that has a contract with the prison.

In one of the images, the inmate appears to plant a kiss on the woman's cheek.

The regional commissioner for North West, Mandla Mkhabela, said the behaviour of engaging with inmates in that manner was not allowed.