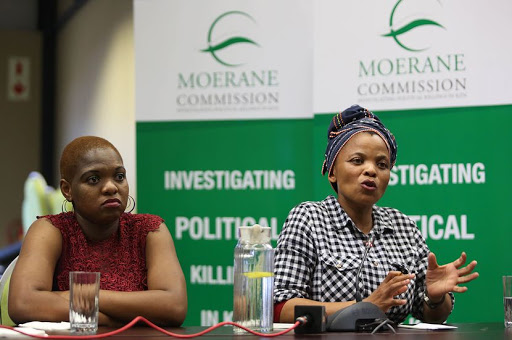 UMzimkhulu councillors Jabulile Msiya and Nontsikelelo Mafa testifying at the Moerane Commission who were injured when unknown gunmen opened fire on the vehicle in which they were sitting with slain former ANCYL secretary-general Sindiso Magaqa in July. Picture: THULI DLAMINI

KwaZulu-Natal ANC chairman Sihle Zikalala has arrived at the Moerane Commission‚ which is investigating political killings in the province.

Moerane Commission: Mafa‚ Msiya say they are still being threatened

Only Zikalala‚ Zuma and Ndobe were expected to testify.

Harry Gwala‚ where Ndobe was previously the chair‚ has been marred by political killings‚ including former ANC Youth League secretary-general Sindiso Magaqa.