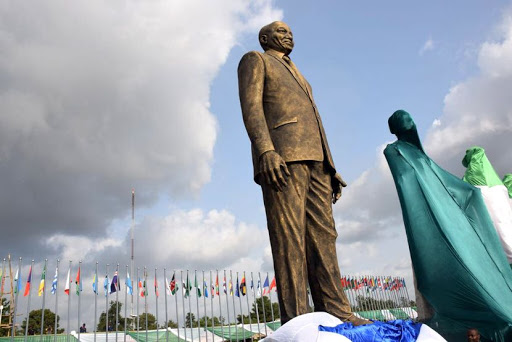 Nigerian civil society groups were flabbergasted after waking up to a statue of South African President Jacob Zuma that was unveiled over the weekend.

Rochas Okorocha‚ billionaire‚ education philanthropist and governor of the Imo State‚ unveiled the bronze statue and named a street after Zuma during his two-day visit to Nigeria which concluded on Sunday.

An honorary title was also bestowed on Zuma.

According to the Presidency the visit to Nigeria was to “strengthen socio-economic relations and deepen cooperation in education.”

A traditional ruler conferred the title of chief of Ochiaga (warlord) on Zuma over the weekend.

Zuma said he was at a loss for words after receiving the title.

“I walked in here‚ as I say‚ as an ordinary freedom fighter. I’m leaving Nigeria‚ through the state of Imo‚ as a hero. What a decoration.”

According to Okechukwu Nwanguma‚ national coordinator of the civil society Network On Police Reform in Nigeria (NOPRIN)‚ Nigerians were not informed about the statue.

“We just woke up to the news of the unveiling of the statue.”

According to Olanrewaju Suraju‚ chairperson of Civil Society Network Against Corruption (CSNAC)‚ it was reported that Zuma was in Nigeria on a “private” two-day visit.

“We had thought that the embattled South African leader was here for a short vacation.”

Nwanguma said the statue was commissioned despite allegations that government workers and pensioners have not been paid for months.

“What message has he [Okorocha] sent out to the younger generation? Glorification of corruption!”

The Supreme Court of Appeal on Friday dismissed a bid by Zuma to appeal a previous ruling that he could face 783 counts of criminal charges relating to corruption‚ fraud and racketeering.

Suraju believes Zuma was not hosted in Abuja‚ because it would have raised questions about President Muhammadu Buhari’s anti-corruption policies.

“All the same the federal government should have called Governor Okorocha to order and advise him not to celebrate corruption.”