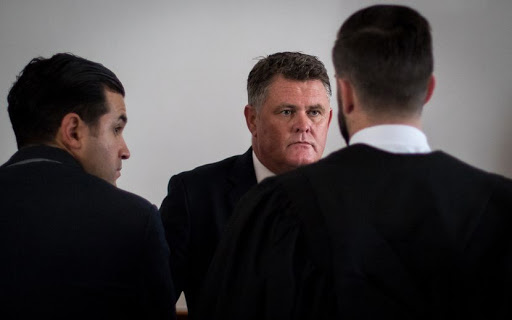 Susan Rohde sustained a large bruise on her right leg when she fell onto a dumbbell after attempting a handstand‚ according to her sister.

On the fifth day in the trial against Jason Rohde‚ the husband who stands accused of murdering her and staging her suicide at the Spier wine estate in Stellenbosch last year‚ this new information cast doubt on state pathologist Dr Akmal Khan’s post-mortem analysis that Susan suffered from “battered woman syndrome“.

Khan testified in the Cape Town High Court last week that Susan had several bruises and injuries on her body‚ which indicated a history of abuse.

However‚ a statement by Susan’s mother Diane Holmes‚ presented to Khan by state prosecutor Louis Van Niekerk‚ indicated that both she and her daughter had “very thin skin” and bruised easily. Rohde’s defence team‚ in court documents‚ indicated that some of her injuries were the result of an altercation between the couple and a gym injury.

Van Niekerk also read out a statement made by her sister‚ Angela Norton‚ which said that Susan told her about the bruise on her upper right thigh – and that it was the result of her having fallen on a dumbbell days before she was murdered‚ and that Susan was known to do handstands. These have led Khan to entertain the idea that she may not have been abused after all.

But Khan has insisted that the cause of death was manual strangulation. According to Rohde‚ she had committed suicide by hanging herself with a curling-iron cord‚ which was attached to a hook mounted on the door of their hotel-suite bathroom.

“There are also bruises on her lower legs – did he kick her? This also wouldn’t explain the haemorrhaging to her neck‚ and the broken thyroid cartilage – did he grab her neck during the altercation?

“This does not explain the cause of death by manual strangulation. It does not explain abrasions on her neck from the fingernail scratch marks‚” said Khan‚ adding that he would need more detail about the alleged confrontation to make a conclusion.

Earlier on Monday‚ Khan also laid into Dr Reggie Perumal’s findings of a second post-mortem‚ requested by the defence‚ saying that Perumal left out crucial findings in his report – such as large amounts of blood found in Susan’s intestines and the haemorrhaging of neck and a broken thyroid cartilage – consistent with strangulation.

“These are important findings‚ because they are not found in a hanging suicide case‚” said Khan. “I would be concerned as to the impartiality of this report in the context of providing expert testimony to this court.”

The case has been postponed to Wednesday‚ for defence advocate Graham van der Spuy to prepare for his cross examination of Khan.