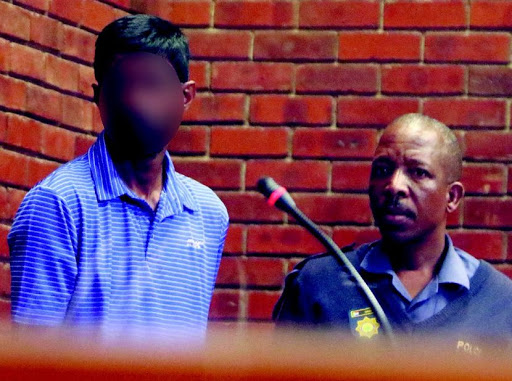 The teacher who allegedly sent pictures of his genitals to a schoolgirl appeared in the Thabamoopo Magistrate's Court in Lebowakgomo yesterday. Photo: ANTONIO MUCHAVE

The principal of an independent school in Limpopo says he is ashamed at one of the teachers who allegedly sent pictures of his genitals to a Grade 10 pupil.

The 44-year-old teacher, who cannot be named as he is yet to plead, appeared before the Thabamoopo Magistrate's Court in Lebowakgomo yesterday.

He was arrested on Wednesday after he allegedly sent pictures of his genitals to a 15-year-old female pupil and also asked her to send him nude pictures of herself.

The pupil alerted her parents and they opened a case against him. He faces charges of promoting the sexual grooming of children.

Yesterday, Rusplaas Christian Model School principal John M John said he asked the teacher to resign from the school four days ago after they heard about the case.

He said the incident was an isolated one at the school.

"This is unfortunate. I am ashamed. I called the learners this morning [yesterday] and spoke to them. I personally apologised to the learners," he said.

The pupil's mother said she was shocked to see nude pictures of a grown man on her child's phone.

The woman, who lives in Gauteng, said she travelled to Limpopo after receiving a phone call from the teenager's grandmother informing her of what had happened.

"I couldn't believe that my child was exposed to such things. It broke my heart to see that," she said.

"I am very disappointed. He must not get bail. I believe that this is not the first time he is doing this. The other children were probably afraid to speak out," she said.

She said the girl was traumatised and actually asked to be removed from the school.

John said the incident happened after the teacher organised an unauthorised trip for a basketball tournament to Phalaborwa, almost three hours away.

John said pupils had informed him that the teacher collected monies from them to pay for the trip which was cancelled.

When the alleged victim pupil contacted the teacher to inquire about the cancellation, he allegedly sent her lewd images of himself.

Yesterday, the state said it intended opposing bail when the teacher makes his next court appearance on October 24.

The court also heard the suspect had no previous convictions or pending cases.

The teacher had been employed at the school as a life orientation and physical education teacher since 2006.

John said they would have more meetings with parents and teachers about the issue.

"It is shocking that teachers who are the custodians and guardians of children in the absence of their parents can stoop to such levels," Makondo said

This is the second shocking sexual offence case to be reported in the province this week. A 52-year-old doctor was arrested in connection with the rape of a 17-year-old girl in his surgery in Nkowankowa, Tzaneen.