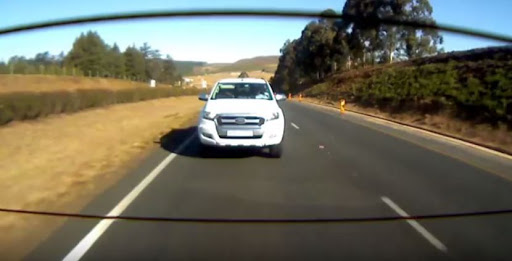 The behaviour of drivers with blue flashing lights was a hot topic of conversation again on Thursday when the driver of a Ford Everest posted dashcam footage of a collision at 125km/h on the N3 in KwaZulu-Natal.

Rod Deventer was travelling on the freeway when a white Ford Ranger with a dash-mounted blue strobe light approached from behind‚ overtook him on the left‚ clipped his vehicle and then sped off.

Posting the clip on YouTube‚ Deventer wrote: “Driving Westerly 2kms on the N3 from exit 107. I was not able to go into left lane due to slow trucks. A blue light vehicle comes from behind‚ passes then brakes in from of me causing damage to my vehicle. They proceeds to drive off.”

A speed reading displayed on the footage indicated that the vehicles were travelling at approximately 125km/h.

It is unclear if the blue light vehicle was an official police bakkie or if it was responding to an emergency. The incident happened in September.

While Deventer was not amused by what happened‚ some people who watched the video said that he should have pulled into the left lane to let the “emergency” vehicle pass safely.