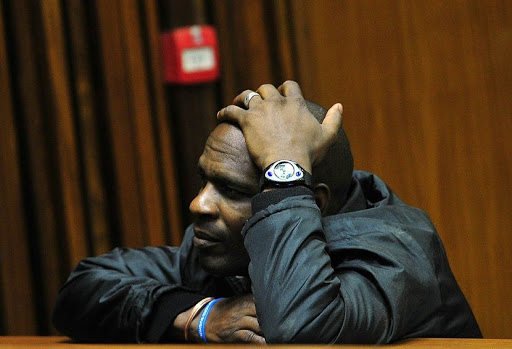 One of the members of the Alexandra balaclava rape gang yesterday said he was framed by his friend and he was not guilty of the crimes he is accused of.

Josias Xaniseka Mkansi, 48, was yesterday handed 14 life sentences for raping women and minors as young as 14 years. Mkansi was also sentenced to 185-years imprisonment for 11 robberies and two counts of kidnapping.

Reacting to the sentence Mkansi exclusively told Sowetan that he was unperturbed by the hefty sentence.

"I'm not moved by the sentence because I know I didn't rape and rob those people. It is Sinja Mabitsela [his co-accused in a separate trial] who did all those things and he framed me," he said.

Mabitsela had already pleaded guilty to 76 charges, including rape, robbery and kidnapping. He will be sentenced next month.

Mkansi couldn't explain how he was framed though he was linked to the crimes through DNA.

"Yes, I admit that I was found with unlicensed firearms and ammunition. That is the case I can answer for. I never raped anyone."

Handing down the sentence, Judge Ingrid Opperman said Mkansi did not show remorse.

"Mkansi is a serial sexual predator and lacks capacity for mercy," Opperman said.

The judge said the duo had terrorised the Alexandra community for some time.

Mkansi had also blamed his late traditional healer father Mahlambhaxilevu Mkansi for not taking good care of him and his siblings when they were growing up in Buqa village near Giyani in Limpopo.

In a social worker's report presented in court, Mkansi said he grew up an angry man because his father had 37 children from nine wives and his mother - the seventh wife - was left to fend for herself.

Mkansi grabbed one of his victims by the throat and raped her without a condom putting the woman in danger of contracting sexually transmitted diseases, the court heard.

"He threatened to shoot her. She was raped in front of her boyfriend and [they have since broken up].. .," Opperman said.

She said the rape survivor was still experiencing flashbacks of the incident. Another survivor said Mkansi pointed a firearm at her, tore her clothes before raping her

The victim's report told how the rape survivor who didn't testify had her virginity broken by Mkansi and Mabitsela.

Women and Men against Child Abuse managing director Miranda Friedman welcomed the sentence. "We really need to send a strong message out there. Rape is repulsive, degrading, humiliating..."