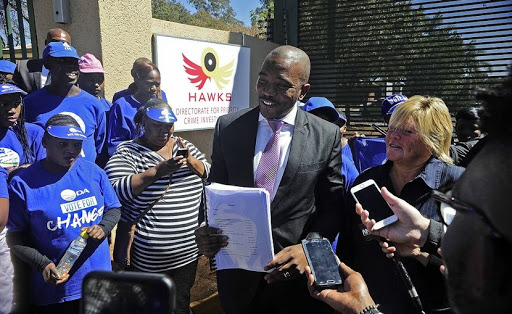 DA leader Mmusi Maimane and Glynnis Breytenbach handed over to the Hawks in Pretoria what he says is evidence of theft of public funds at the Estina Dairy Farm in Vrede, Free State. Photo Thulani Mbele.

Radical economic transformation was not a practice that would benefit all‚ Democratic Alliance leader Mmusi Maimane said on Wednesday.

“The way the ANC government uses the term – and the way it has been written into the new mining charter – radical economic transformation is little more than a fig leaf for elite enrichment‚” he said.

“It is a way of legislating the replacement of one elite with another. A zero sum game that changes the owners‚ but where ordinary workers and ordinary communities see no change and no improvement‚” he said.

Maimane was speaking at the Joburg Indaba held in Sandton attended by mining giants as well as other stakeholders.

“If we’re all okay with the ANC government’s definition of radical economic transformation‚ then it won’t take us long to agree on a way forward. The MPRDA of fifteen years ago‚ along with this year’s Mining Charter‚ give us all the tools we need to transfer mine ownership from an old wealthy elite to a new wealthy elite‚” Maimane said.

“So if the idea is to replace white mining tycoons with black mining tycoons and nothing more‚ then this could be the shortest Mining Indaba session ever.”

He told delegates that he was against slogans such as radical economic transformation as well as white monopoly capital.

“[They are] a deliberate ploy to sow confusion among South Africans while President Zuma and the Guptas continue to loot public resources‚” Maimane said.

He touched on aspects regarding the controversial mining charter which has been rejected by several in the mining industry including the Chamber of Mines.

Minerals Minister Mosebenzi Zwane faces a court battle over the charter which the chamber says if implemented‚ will kill the industry.

“When a new mining charter is forced onto the mining industry by a minister who flies in a Gupta-owned private jet to negotiate private deals‚ we have no option but to wonder: Who exactly wrote the Charter?” Maimane said.

“And‚ given what we know about the shenanigans of the Guptas in state-owned enterprises‚ why must the mining industry believe that those entrusted with the democratic responsibility to govern are the real government of South Africa? In other words‚ who must this gathering believe – Dr Zweli Mkhize or those in government who act on behalf of the Guptas? Who is really in charge of South Africa?”

Mkhize had earlier delivered the opening address at the Indaba where he told delegates that the issue of state capture was “an embarrassment” for the ruling party.

He said a commission of inquiry should promptly be established to deal with allegations of state capture in order for the public “to know what is really going on” and for the law to take its course against wrong-doers.