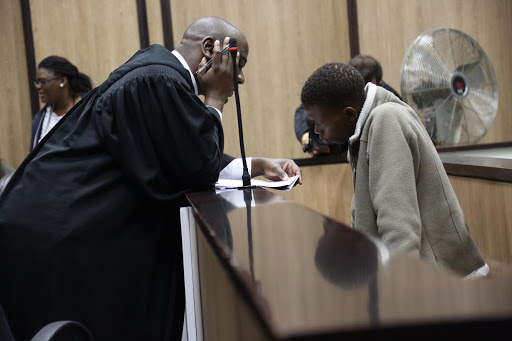 The 19-year old school boy whose father handed him over to police in connection with a shocking video of an assault on a teenage girl was granted bail in the Ntuzuma Court outside Durban on Monday. Picture: JACKIE CLAUSEN

The mother of a 19-year-old who has been charged with severely assaulting his 17-year-old former school mate‚ captured in a video that went viral‚ broke down in the Ntuzuma Magistrate’s Court outside Durban on Monday.

Lindokuhle S’phiwe Dube‚ a Grade 10 pupil at a high school in KwaMashu‚ was released on R1‚500 bail. He has been charged with assault with intent to do grievous bodily harm.

The slightly-built teenager was supported by his mother‚ Happy Dube‚ who broke down in the public gallery as he cut a lonely figure in the dock. She did not wish to comment.

Wearing a camel jacket with a faux sheep trimming‚ ripped jeans and sandals‚ Dube hugged his knees as he crouched in the dock. He covered his face as photographers took pictures while he consulted with his state appointed lawyer during a short break.

The state did not oppose his bail as he was not considered to be a flight risk and had handed himself over with the help of his father who was also present in court.

His lawyer had requested that bail be set at R500 but the court viewed the crime as serious and set it at R1‚500.

He will return to court on September 14. But the state has set bail conditions that include him not interfering with state witnesses‚ not directly or indirectly contacting the complainant‚ going to her home‚ school or sending someone there.

The court heard that Dube was in an exam room when he had an argument with the complainant’s sister and allegedly assaulted her. The two were separated by a teacher and the exam proceeded.

The girl tried to fight back but Dube allegedly continued the assault until her nose bled. She was rescued by another boy who intervened.

The state prosecutor told the court that they needed to retake a statement from the complainant’s sister as they could not construct the charge due to a lack of facts about her involvement.

The prosecutor confirmed that they were contemplating additional charges against Dube but asked for an adjournment for further investigation. A doctor’s report is also outstanding.

The police also need to obtain a statement from the teacher who intervened during the incident and a school security guard who was present.

The investigating officer has also been instructed to find the video footage of the incident and obtain a statement from the complainant’s sister.

KwaZulu-Natal education department spokesman Muzi Mahlambi said the department was happy that the court process was under way.

“We’ll keep on following the matter. As the department‚ our being here in court has given us some more details as to how we’re going to proceed with our own internal investigation‚” he said.

Their investigation‚ he said‚ would inform them as to whether any action should be taken against the school principal.

The department will also assist the assault victims and those pupils who may have been affected by video footage of the incident.