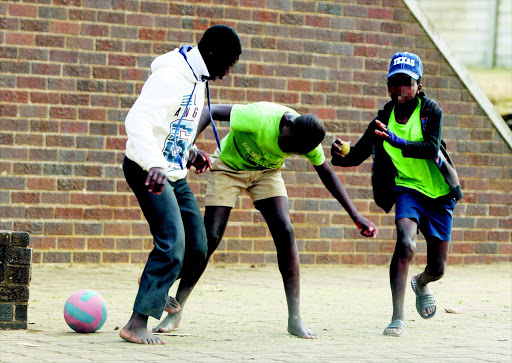 Years of poverty drove 15-year-old *Kevin to swim across the crocodile-infested waters of the Limpopo River from his home country of Zimbabwe to South Africa.

Kevin is one of 23 boys from the southern African nation currently living at a children's centre in Makhado, after coming into the country illegally without their families.

Sitting on one of the metal-framed beds in a room shared with five children, Kevin spoke of the hardships of leaving home alone.

Kevin, who is in Grade 7 at one of the local schools, was born in the arid and predominantly Shona-speaking town of Masvingo in south-eastern Zimbabwe. He lost both parents at an early age, but spoke more about his mother's violent death in 2009.

Kevin explained his mother, a traditional healer, was killed after a dispute in their village. He recalled how she was covered in blood after she was hit over the head with a garden tool. "I was so young and there was nothing I could do to protect her. I tell God to help me forget because when I start thinking about it I become stressed," he said.

Kevin stayed with his sister for a few years until she could no longer afford to look after him. He had to start doing odd jobs and selling eggs for survival until he decided to run away from Masvingo in search of a better life.

Kevin said he walked for weeks from Masvingo before he reached the Zimbabwean border town of Beitbridge. Along the way he slept in the open, begged for money and ate wild fruit such as nhurungu.

Last June, Kevin swam across the river which left him with Bilharzia, a tropical disease that infects the intestines, bladder and other organs.

He said he was first taken in by a children's shelter in the border town of Musina and later moved to Makhado.

He said he did not miss his home country because in South Africa he can attend school and eat decent meals. "Zimbabwe is a good place, but there are too many problems. Most people come here because of hunger."

The manager at Tshitandani centre, Nadine Smal, said most children arrived at the centre in a state of psychological trauma because of their experiences. Smal described Kevin as an "extremely bullied and abused" boy. "I have been called by the school three times because the other children were beating him up. He has very low self-esteem."

Smal said the youngest boys at the centre were aged eight , nine and 12 . She said the children had been in the country for 10 months, however, finding their families was a difficult task.

Meanwhile, some of the under-age children living in South Africa after leaving their home countries depend on odd jobs to make money.

When Sowetan visited a small market in Musina, young boys could be seen busy at work.

*Chris, a 14-year-old also from Masvingo, was washing pots while dressed in his school uniform.

Chris said he ran away from home in November because he was being ill-treated at a local children's centre.

He came into the country through human traffickers.

"We hid inside the car. They put boxes and mattresses on top of us," Chris said.

He said when he first came into the country he was told about a local home for children in Nancefield township, where he currently stays.

Some of the boys said they make between R30 and R50 a day, which they use for toiletries, books and clothing.

"Life is good for me here because I attend school. I had to drop out of school in 2013 after my mother died. I miss her. She used to do everything for me."

*Tendai, a 16-year-old from Harare, said he ran away from home because of abuse at the hands of his grandmother.

"I feel free from the situation back home when I'm here."

Tendai, who is in Grade 7, said he wanted to pursue a career as a scientist.

Bishop Simon Sithole of the I Believe in Jesus Church said younger children who come to the church are being referred to a local children's centre.