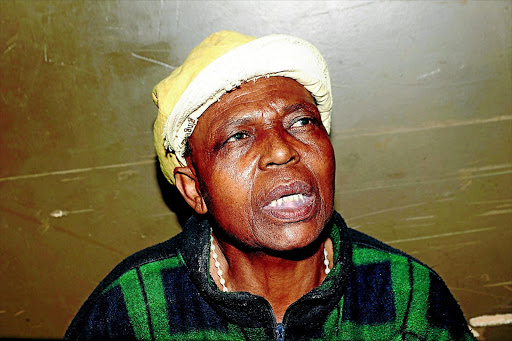 Maria Makatu of Mamelodi tells how her grandson was knocked down by a speeding City to City bus in the township. Photo: Veli Nhlapo

Siyabonga Tsiane was killed by a speeding City to City bus in Mamelodi, Tshwane, over a year ago, but his family is yet to find closure over his death.

The seven-year-old Grade 2 pupil at Refentse Primary School was hit by the bus after visiting his mother in hospital, according to his grandmother Maria Makatu.

Makatu said an eyewitness told the family that Siyabonga was hit by the bus' bumper.

Autopax, a subsidiary of the Passenger Rail Agency of SA, gave the family R15000 for his funeral.

"We told them we did not have money to bury Siya. We took it (money) because we were desperate," Makatu said.

The Makatu story was one of many sad tales told at the public hearings of the Gauteng provincial legislature's roads and transport portfolio committee inquiry into poor services and fare increases in the bus subsidy programme.

The hearings were held at the Walter Sisulu Square in Kliptown, Soweto, yesterday.

Bus companies Putco, North West Star and Ipelegeng Transport, are also under the spotlight in the inquiry.

Makatu, 65, said buses sped into the township. A speed hump was only built after Siyabonga was killed.

The culpable homicide case against the bus driver was thrown out of court in circumstances that have never been explained, according to her.

The committee heard frustrated commuters' complaints against the companies receiving millions of rands in subsidies from the government.

Amos Shabangu of the Mamelodi Commuters Forum told the committee that Autopax, which operates commuter buses between the township and the Pretoria city centre, promised 78 buses but only delivered about half.

"There are no buses in Mamelodi on Fridays, they are taken to long distance [trips]."

Minah Mokoena, secretary of the Meyerton Commuters Forum, said the Vaal had similar problems as Mamelodi.

"Buses were halved from 40 to 18 without commuters being informed. Last week there were only eight buses," said Mokoena, adding that the buses were full of cockroaches.

Mokoena said the service got so bad that once commuters were transported to workplaces and schools [in the morning] but there were no buses for them to return [home].

"People had to sleep at their workplaces," she said.