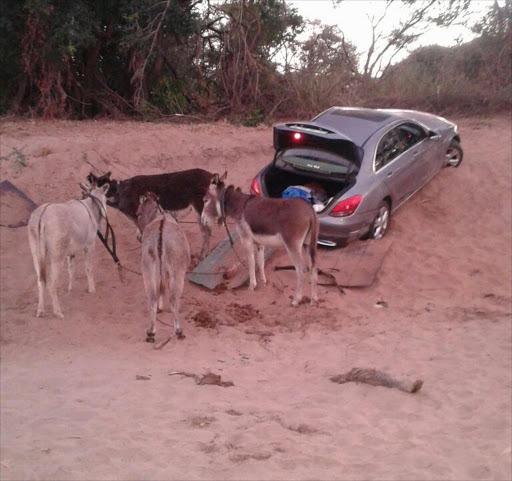 Horsepower is a key measure of vehicle performance, but some cross-border vehicle smugglers found a lack of donkey power their undoing this week.

Police thwarted a daring attempt to smuggle a stolen luxury vehicle across the Limpopo River using donkeys to pull it through the muddy sand and into Zimbabwe, a practice that is becoming increasingly commonplace.

Police said they found the Mercedes Benz C220 stuck in the river bed on Monday, after efforts to pull it across using at least four donkeys were abandoned.

"The suspects were using donkeys to pull the car across the river but our members were just in time to pounce on them after the donkeys were apparently no longer able to pull it through the sand," said Limpopo police spokesman Brigadier Motlafela Mojapelo.

"The suspects fled into the bushes on the Zimbabwe side."

"They dig into the river sand and place huge rocks to allow vehicles to pass through while been pulled by donkeys."

At least 88 stolen luxury vehicles have been recovered since January after they were sneaked through South African borders with Mozambique and Zimbabwe, according to the SANDF.

"At the beginning of the year we would recover at least 15 stolen vehicles per month," Pixon said.

"However, due to intensified visibility on our borders, the number has been reduced to eight.

The SANDF recovered the vehicles through its Operation Corona, which is targeting cross-border car theft.

Last week, a police operation targeting areas along the border between Phafuri and Pontdrift recovered vehicles that got stuck in the middle of the Limpopo River.

One of the vehicles, a white Mercedes Benz, was apparently stolen in Durban and belonged to a car rental company. It was allegedly destined for Zimbabwe.

Police further recovered a Range Rover Sport valued at R900000 en route to Malawi. The vehicle was on the verge of being smuggled through Beitbridge border post.

A Ford Ranger was intercepted when the alleged suspects were about to cross the Limpopo River.

They also fled into the bushes when police arrived.

Last year, several vehicles were also recovered from the river after getting stuck in the mud and left covered with tree branches and rocks to conceal them.