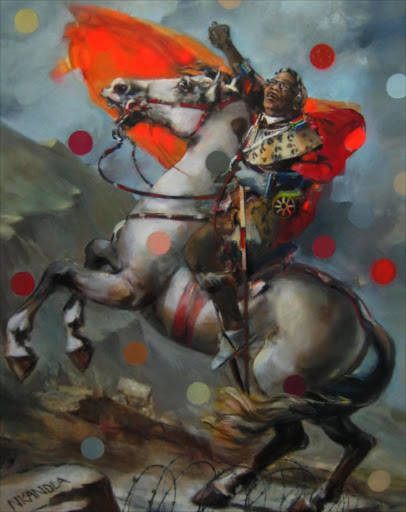 In a painting titled #ZapoleonCan’tFall‚ a South African artist has compared President Jacob Zuma to the megalomaniac Napoleon Bonaparte.

The artwork is a recreation of the 1801 renowned painting “Napoleon Crossing the Alps” where the French military leader was painted seated on his high horse‚ his hand up in celebration of victory.

Unlike the French leader though‚ Zuma isn’t in a red cape and sophisticated garb‚ instead‚ he is shown dressed in his traditional leopard Zulu gear‚ his spear in hand.

The South African flag and ANC logo are plastered on his figure‚ representing graffiti‚ propaganda and sloganeering.

The landscape is littered with polka dots to evoke the ruling party’s carnival like approach to government.

“The text ‘Nkandla’ positions the horse on the controversial stretch of land plagued by corruption and fraud. The barbed wire tangled between the hooves of the horse references the security upgrade at Nkandla‚” Chandler said.

“The horse in my painting becomes a metaphor for power and the rider for the abuse thereof. Power has become kidnapped in SA and the current political issues of state capture‚ corruption and nepotism echo the notion of Napoleon as a revolutionary with megalomaniac tendencies‚” he added.

Explaining the significance of the painting‚ Chandler said: “History is written by the winners and this work satirises the vitriolic claims of our country’s leadership against a backdrop of a flawed democratic idealism that has little to celebrate.”

The painting is currently on exhibition at The Gallery in Riebeek Kasteel‚ Cape Town.