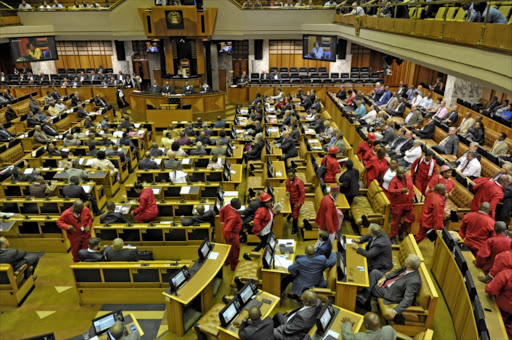 Parliament during the State of the Nation Address. Picture Credit: Gallo Images

Parliament is to spend more than R4 million to conduct a review of its organisational model in what whistle-blowers say is unnecessary spending as the institution's HR division should be doing the job.

Well-placed officials have disclosed that management of parliament recently received harsh criticism from presiding officers Baleka Mbete and Thandi Modise when they learnt that the institution has enlisted the services of consultancy firm KPMG to evaluate the efficiency of its organisational model‚ arguing that parliament's HR division was outsourcing its work.

Parliament's spokesman‚ Moloto Mothapo‚ has confirmed "the back-to-basics project‚" even stating that it was initially projected to cost R37 million in 2015‚ but denied that Mbete and Modise were against it.

"The back to basics project was initially costed at R37m in 2015‚ but a large portion of it was implemented through existing internal capacity‚ thereby drastically bringing the project cost down to R4m. Procurement of such costs are approved in line with the Financial Management of Parliament Act‚ not by the HR head‚" said Mothapo.

"No money has been paid to KPMG for the back-to-basics project yet. Once payments are done they'll be in line with the contract value of R4m."

But public sector union NEHAWU said it was startling that parliament was embarking on the same organisational review it conduced just three years ago in 2014 through Manto Management Consulting.

The union said the latest organisational review was premature and amounted to wasteful expenditure as the recommendations of Manto Management Consulting have not yet been implemented.

But Mothapo has strongly defended the hiring of KPMG‚ arguing that parliament was unable to conduct the organisational review by itself because it simply did not have such internal expertise and it also required an outside independent view.

"This is a specialised area of expertise which requires skills that Parliament does not currently have. It also requires independence as it cuts across the entire institution. In terms of standard practice elsewhere‚ such an exercise is conducted by external providers to ensure expert service‚ professional objectivity and independence.

"To say that the back-to-basics project is simply about an 'organogram' is a blatant trivialisation of such a complex and overarching exercise‚" he said.

Other parliamentary insiders said the legislature's head of HR‚ Lizo Makele‚ was in trouble for signing off on the contract‚ which was above his delegated authority‚ but this was also denied by Mothapo.

The Sunday Times has since seen tender documents that show that the contract was approved by secretary to parliament Gengezi Mgidlana in December last year.

Mgidlana was placed on special leave by Mbete and Modise in June this year after they asked an external audit committee to probe a litany of allegations against him‚ including mismanagement‚ abuse of power and unauthorised international trips.