EFF 'ready to work' with the ANC 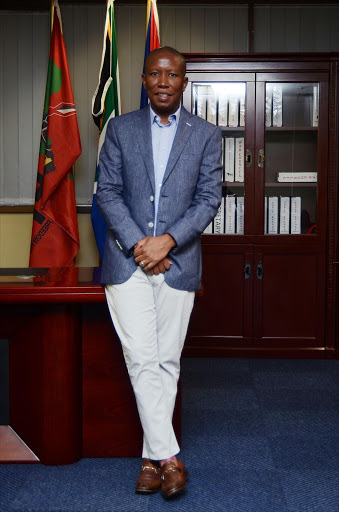 The EFF and ANC should be working together, but what stands between "us is institutionalised corruption by the governing party".

This is what EFF leader Julius Malema told Sowetan in a wide-ranging interview on Friday, as he reflected on his party turning four years old on Wednesday.

He said ANC leaders were busy campaigning to replace President Jacob Zuma in December, but none of the contenders were serious about fighting corruption.

He singled out Deputy President Cyril Ramaphosa's campaign, saying so far he claimed to be against corruption and wanted to rebuild the ANC.

"Why has Cyril not opened a single case against corruption. Cyril and SACP protected the Nkandla scandal. We challenge Cyril to go and open a case on corruption. The e-mails have clear evidence on corruption," he said.

He also challenged Ramaphosa to go to Marikana and face the workers as well as the widows and families of the mineworkers that were killed in 2012.

"He needs to go to the most hostile environment where he will be attacked and then humble himself. It has to be genuine, he must ask for forgiveness and commit to compensating them."

On Nkosazana Dlamini-Zuma, he said she was an extension of Zuma and she would do nothing about corruption.

He said should the ANC get below 50% of votes in the 2019 general elections, his party would consider forming a coalition with it only if the party's leader publicly announce that "I will arrest Zuma for corruption" before 2019.

Malema was clear that Zuma should be charged and jailed for several allegations of corruption against him, including reinstating more than 700 corruption charges which were dropped 2009.

"EFF will work with the ANC whose leader will pronounce before 2019 that he will arrest Zuma for corruption, for wrong things he has done while in office."

He warned the ANC that its arrogance was eating it away and that was the reason they lost several metros during local government elections.

"There were no [Gupta] e-mails in August 2016, but the e-mails are hitting the brand ANC very hard."

Malema added the DA was also no different from the ANC. "From time to time the DA wants to impose its ideas on small parties they are in coalition with at municipalities.

"EFF has a way of humbling them. Zuma would have been humbled a long time ago if ANC got below 50% votes during national elections," he said.

Malema said the EFF forced the DA to fire Helen Zille and if they were not in coalitions that would not have happened.