Tears and jiving at Phiri memorial 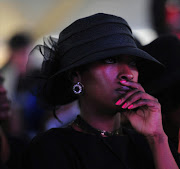 Rabelani Phiri the widow during the memorial service of legend Ray Phiri held at Mbombela Stadium in Mpumalanga. / Veli Nhlapo

When her husband's band Stimela took to the stage to perform at his memorial service at Mbombela Stadium in Nelspruit, Mpumalanga, the legendary Ray Phiri's wife Rabelani wept uncontrollably.

Phiri's sons Akhona and Pholo, and other relatives danced to the tunes nearby along with hundreds of other mourners, who screamed "we want more" after the first two songs.

The 25-year-old Rabelani was comforted by a relative and Mpumalanga acting premier Refilwe Mtsweni.

Phiri's friend and driver Larry Myataza told mourners that he and Rabelani had rushed to Nelspruit MediClinic at about 3am on Wednesday after receiving a dreadful call from the hospital.

"When we got there, he was not breathing properly. He was not talking anymore. He wanted to talk but the words were not coming out of his mouth. He cried.

"His wife rubbed his chest. While she was doing that, he took his last breath. We just cried. She held him while crying," Myataza told Sowetan on the sidelines of the service.

He said he had met Phiri when he was only 17 years old and had learnt a lot from him.

"Our last tour was in December. We went from iBhayi [Port Elizabeth] to Durban and then Johannesburg. We did not sleep that day.

"He was very passionate about music. He was a brother, friend and father to me," Myataza said, adding that he still did not believe that Phiri was dead.

Family spokesman and Phiri's best friend Sheriff Molefe said: "The family has not grieved. They have not had proper time to mourn because there are always people coming and going.

"They haven't had time to grieve.

"The time of reckoning will come after the funeral. That is when things will start kicking in," Molefe said.

Phiri had 10 children. The youngest, whom he fathered with Rabelani, is eight months old. He also had three grandchildren.

Speaking on behalf of the children, Pholo said he would follow in his father's footsteps.

"One day, my father was performing at KaNyamazane Stadium and I was at the back.

"When he started singing... I grabbed a microphone and mimed the song...

"He thought I had potential in music and he bought me drums...

"Those are big shoes to fill but I will try for the sake of the family and kids," Pholo said.

Phiri's sisters Landiwe Phiri and Thoko Zulu said they would miss his humility and cooking.

Speaking on behalf of Rabelani's family, Boiki Tsedu said: "We are grateful that Chikapa respected our daughter in his lifetime.

"We believe that she respected Chikapa...

"We would appeal that the community that Phiri lived in continue to relate to the daughter and children the same way they would have done if Phiri was still there."