The Mandela tree you can't touch 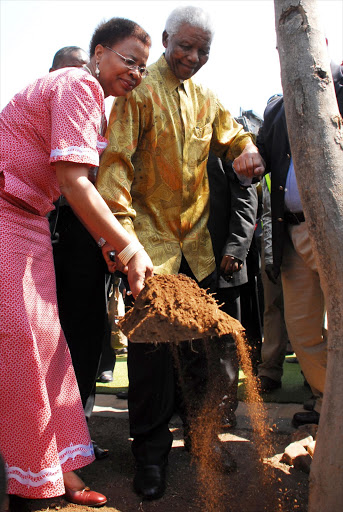 You cannot cut it‚ prune it or even get into the inner circle where it was planted. That is the tree planted by the late former president Nelson Mandela in 2008 in Thokoza Park‚ Soweto‚ which has now been gazetted by the Gauteng Heritage Resource Authority as a champion tree.

At the time it was planted‚ the indigenous white stinkwood tree was about three years old.

Today‚ Johannesburg City Parks and Zoo will officially celebrate the status that this tree has received among the millions of trees in the City of Gold.

A champion tree‚ in terms of legislation‚ means that it must be protected and preserved‚ City Parks spokesperson Jenny Moodley explained.

“Our responsibility as Johannesburg City Parks and Zoo is to make sure that the tree remains tall and strong. On Monday we will be unveiling a blue plaque on the tree site as all the city’s heritage sites have the blue plaque as part of ensuring that this site is treated as a heritage site. The tree was planted by Madiba as part of his 90th birthday celebration‚” Moodley said.

The tree is situated not far from the parking lot of Thokoza Park. It has been fenced for protection. Inside the fenced area are two plaques. One is an extract from Mandela’s speech when he received the Nobel Peace Prize in Oslo. The second plaque on the right is the timeline of Madiba’s journey from his birth to when he planted the tree.

“There is a national call by the Department of Agriculture‚ Forestry and Fisheries when they are calling on members of the public and entities like City Parks to nominate a champion tree. This tree will not be cut. If it is going to be pruned in the near future it will have to be done in consultation with an arboriculturist and so on. You can’t expect a normal street team to come and prune this tree‚” Moodley said.

There are also other trees planted next to the champion tree. City Parks planted 82 trees and every year a tree would be added as Madiba grew older.

“We are absolutely grateful to the residents of Soweto that to date this place has not been vandalised. We would like to think that they honour this site so we do not anticipate any incident on the site‚” Moodley said.

She added that tourists visit the place frequently and take pictures next to the tree.

Today the tree will get new fresh flowers around it to mark the occasion.

But City Parks still faces challenges with getting the buy-in it needs around trees‚ particularly in townships.

“We still have issues where people don’t understand the value of the trees. We want to see townships with as many tree canopies as we see in Saxonwold and Parkhurst. The challenge is the space where you can plant a tree.

“If you go to townships and you knock at somebody’s house and tell them I’m going to be planting a tree outside your house‚ you ask the homeowner if they are prepared to take it and whether they are happy with the positioning of the tree. We get told no. That is going to be my driveway. Spaces are constrained in areas like Soweto.”

Moodley said because of the drought there were fewer trees planted in the city.

The city limited its planting programme to fruit trees in public facilities‚ such as retirement homes‚ schools‚ police stations and libraries and parks.