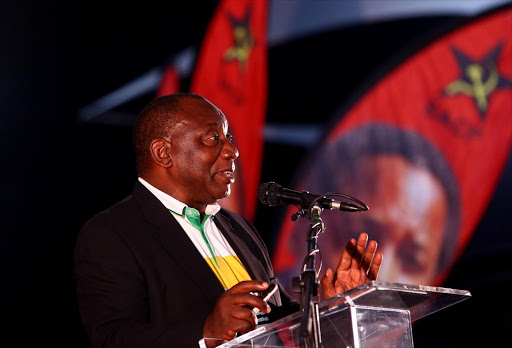 Caption: ANC Deputy President Cyril Ramaphosa delivering a message from the ANC during the 14th Congress of the SACP held at Birchwood Hotel. /a Masi Losi

The ANC Youth League in the Western Cape has called on its mother body to stop inviting its alliance partners to events if they continue to snub President Jacob Zuma.

Both the South African Communist Party (SACP) and labour federation Cosatu have said Zuma should step down as the country’s president and have been involved in campaigns seeking his removal.

As a result the ANC’s two alliance are issuing invitations to Deputy President Cyril Ramaphosa instead of Zuma.

Cosatu and the SACP want Ramaphosa to succeed Zuma as president of the ANC. The youth league in the Western Cape wants his Zuma’s former wife‚ Nkosazana Dlamini-Zuma‚ to take the top job.

The last SACP event Zuma attended was its May Day celebrations in Free State‚ where he was booed by the crowd‚ which lead to the event being cut short.

Western Cape youth league chairperson Muhammad Khalid said the decision to boycott ANC events to which leaders of the two alliance partners’ leaders had been invited was taken at the league’s provincial working committee meeting on Thursday night.

Speaking at a press conference on Friday‚ Khalid said the Western Cape will ask the national youth league structure and the youth leagues other provinces to adopt the same stance.

Despite this boycott‚ the Western Cape youth league is not opposed to the ANC-led alliance and would continue to participate in alliance meetings and interact with the the Young Communist League.

“We are basically returning the favour so that their leadership are not welcomed to speak in the events of our mother body. If the mother body continues to invite them‚ we will stay away. We won’t address those events‚” said Khalid.