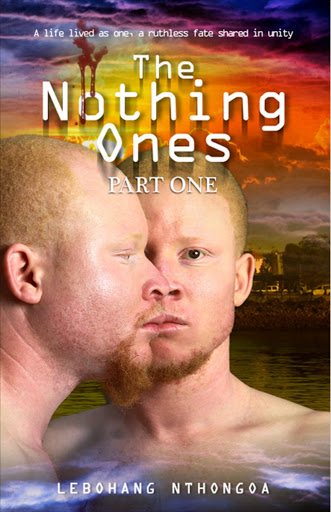 This first time offering from author Lebohang Nthongoa is a must read.

TITLE: The Nothing Ones

The book, aimed at young adults, arrived at the right time. The subject matter it tackles is something often reported in the news, but rarely spoken about. The book is about the life experiences of Tanzanian twins with albinism.

Nthongoa takes us on a journey of their everyday challenges, the love they encounter and terrible danger they face - just by their very existence. The reader will weep, rejoice and recoil at some of the events that occur. A shocking and terrible thing happens towards the end of the book that will have you questioning why people are the way they are.

A life lesson is also to be learnt. Nthongoa writes in a descriptive manner that paints a picture for even the most unimaginative reader.

A downside to this could be that a reader might find it too descriptive. This can cause the reader to get lost in the setting.

The twins' journey takes them from their homeland Tanzania to South Africa.

They go from having a village of loving people to having to survive solely on their wits and each other.

Soon, personality clashes occur and the strain of the road seems to get to them.

They must survive and work through issues that have been festering since childhood. The book is a strong first effort.

Available on Amazon and via email: lebo@graffitilove.co.za

More on the book and author

First-time author Lebo Nthongoa's book aimed at young adults tackles albinism, identity and destiny. The self -published author is currently promoting the book titled The Nothing Ones. Londiwe Dlomo sat down with her to discuss the book's subject.

Why did you choose the subject of albinism?

This particular subject is one of those where you read about something and you can't ignore it ... but I didn't know what to do about it. It's the one thing that kept me up at night.

So, after reading about the albino killings, it was such a foreign concept, it was such a weird thing for me to hear. I was just never aware of the happenings, it just tormented me for a long time.

And in those months while I was mulling over it, the story developed in my mind although I never put anything down on paper. I never had a plan.

What do you hope the reader takes away from the book?

I hope there's an awareness that people are more mindful of their own behaviour.

You have to start with yourself first. I know that there are prejudices, South Africans discriminate against people that are different.

If anything, I'm hoping people will be more aware of their own behaviour, their own misguided beliefs and actually make an effort to find out something that's foreign to them, and learn how to relate to people on an individual basis as human beings.

Are there any characters or moments in the book that resonate with you personally?

If anything, writing the book, rereading it multiple times, I hear my own voice, so I don't know if every writer has that.

Were there any parts of the books you feel you want to change?

I deleted those things! There were several. It took me a good three years to write the book. Initially I was thinking of giving the twins supernatural powers, but then I thought I'm becoming part of the problem because I'm highlighting a legitimate problem. You don't want to spread the problem through a book because a book is permanent.

What are your hopes for the book?

I hope that my target audience learns that there is a problem and that as an individual you can do something .

Why did you decide to title it The Nothing Ones?

The Nothing Ones means the underdogs, the ones who start on the back foot, the ones that just start with nothing.