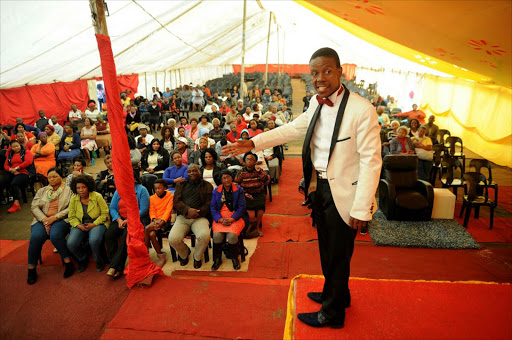 Controversial charismatic pastor Paseka "Mboro" Motsoeneng has asked his followers to fund his legal fees as he prepares to take his battle with the cultural and religious rights commission to court.

He was speaking yesterday at his church in Katlehong, Ekurhuleni.

Mboro, one of the pastors who crossed swords with the commission over its investigation into harmful religious practices, said he was also going on strike for nine weeks after the release of a report calling for the regulation of churches.

Mboro took aim at the chairwoman of the Commission for the Promotion and Protection of Cultural, Religious and Linguistic Communities (CRL) Thoko Mkhwanazi-Xaluva, accusing her of targeting him.

"I'm calling on you to pay my legal battle (fees) because I must fight Thoko.

"If you don't I will close down the church and you will choose another pastor."

"I'm washing my hands. I don't care anymore. I am going to stop all the services that I provided to the community because Thoko said I am no good."

Mboro said he was registered but that they were still after him. "I am targeted because I am a South African and black," he said.

The preacher is demanding R4900 from each of the more than 5000 congregants he has "helped".

"I want all children and women that I helped to honour and thank me [for my birthday which was on April l8]. Congregants must also send me nine SMSes each at R5 per SMS. These will be for support while I'm on strike," Mboro said.

"If I don't get it, Thoko will give you the help I provided."

Mboro said the commission wanted him to make his bank account public but he refused.

He said he was an artist, comedian and that he sold CDs, T-shirts, caps, owned a construction company and a funeral home, among others.