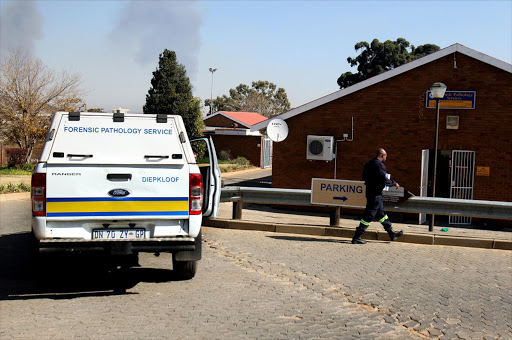 Ramokgopa announced that the strike by Forensic Pathology Service staff is finally over and that the department will pay to train and certify employees. / SANDILE NDLOVU

The Gauteng health department has committed to training its 188 forensic pathology workers and to pay a R594 special allowance to each for dissecting and closing bodies.

Health MEC Gwen Ramokgopa announced yesterday that the month-long strike by forensic workers that affected 11 mortuaries in the province was officially over.

This was after the department and the five trade unions representing the workers came to an agreement which was signed on June 29.

Ramokgopa said the hardest-hit mortuaries were Roodepoort, Germiston and Hillbrow which had a combined backlog of 122 bodies waiting for autopsies. She said the backlog could be cleared within three working days.

"We are pleased to announce that 100% of forensic pathology officers have returned to their work stations since yesterday [Wednesday] morning.

"As we clear these backlogs we plead with grieving families to be patient with us while assuring that we will do everything in our power to expedite the release of the bodies of their loved ones.

"We would like to express our sincere apologies for the inconvenience to families, some of who incurred costs due to the delays and postponed funerals," said Ramokgopa.

She said the department had agreed to resolve all the demands at the Public Health and Social Development Bargaining Council.

Some of the agreements include the standard danger allowance of R397 per month to qualifying workers, a remedial once-off payment of R4800 and to provide protective clothing to the workers. Counselling and debriefing services would also be re-introduced.

All qualifying workers will also get professional training and certificates and then register through the Health Professionals Council of SA which the department will pay for.

This, according to the agreement, should be done within the next six months.

The strike began on June 8 when the workers refused to dissect bodies, claiming that this was extra work which they were not paid for. As a result bodies piled up and families could not bury their loved ones. This prompted the department to rope in the services of SA National Defence Force.