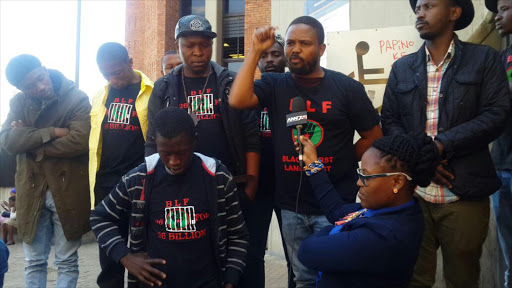 The profession of a journalist is seldom appreciated. Seldom is a word of gratitude expressed.

More often than not‚ the public often frowns upon the reporting of a journalist and his or her actions are continuously subjected to criticism of alleged bias or sensation.

These are the words of Acting Judge Corrie van der Westhuizen on Friday.

The judge interdicted Black First Land First (BLF) and its president Andile Mngxitama from intimidating‚ harassing‚ threatening or assaulting 11 journalists or coming to their homes.

He also interdicted the BLF and Mngxitana from making any threatening gestures on social media that reference any violence‚ harm and threats to the journalists.

He ordered the party and Mgxitama to issue a public statement to all BLF members stating that they do not condone any of the above acts directed at any journalist. This should be done within 12 hours of the judgment‚ which was passed on Friday at noon.

BLF and Mngxitama should also pay the costs of the application.

Van der Westhuizen passed this judgment in an urgent application brought by the South African National Editors Forum (Sanef) and 11 journalists who sought to stop BLF attacks and harassment.

Bruce had written an article in Business Day‚ criticising the Gupta family. BLF members were not happy with its contents.

Sanef launched the urgent application on Tuesday after BLF members threatened‚ on social media‚ to deal with some of the reporters for their alleged racial and biased reporting.

In their application‚ Sanef and the 11 said the conduct of BLF members‚ as evidenced by the incident of last week‚ constituted harassment‚ intimidation and threats.

They did not contend that their reporting was above criticism‚ saying criticism was welcome‚ provided it did not constitute harassment‚ intimidation or threats.

The judge said BLF had not distanced from the tweets.

He said BLF’s undertaking to only advance and hold peaceful protests rang hollow.

The judge said the assault on Cohen and Brown were not disputed by BLF.

BLF’s claim that the assault on Brown was provoked‚ was opportunistic and illogical‚ the judge said. Brown had confronted one of the attackers and called her a fool.

“To be called a fool hardly warrants an attack of any kind‚” the judge said.

BLF members were unhappy with the judgment and made inappropriate comments outside of the courtroom.

One of the applicants for the interdict‚ Katy Katopodis of EWN‚ accused BLF of not complying with the court order because of its behaviour after its judgment.

Mngxitama said the judge would not rule in BLF’s favour because he was white.