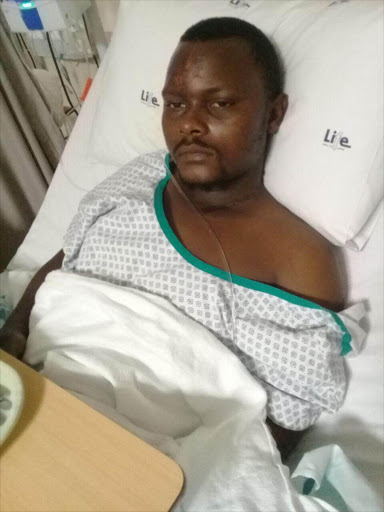 There has been bloodshed on the roads with dozens of people losing their lives and scores injured since Sunday.

Crashes have claimed over 40 lives since the beginning of the week, with Transport Minister Joe Maswanganyi saying that, although, the cause of the accidents was being investigated, reports indicated that "the human factor remains the major cause of the majority of road crashes".

The worst crash occurred in Mpumalanga where 18 people died after an Iveco and a Toyota Quantum smashed into an oncoming truck.

The taxis were transporting employees of Komati mine along the R541 road between Machadodorp and Badplaas.

Some of the families who spoke to Sowetan yesterday said they were shattered.

Mathapelo Madonsela said there was something strange about how her brother Kenneth Madonsela, 28, spoke to her on Monday night.

"Before he went to bed he took his lunch box and said good night a number of times," said a weeping Madonsela.

"He loved joking and used to tell us to leave Kaizer Chiefs and Orlando Pirates to [join] Sundowns," said Thela.

One of the survivors, Michael Mncina, 29, has praised the deceased Iveco driver Lawrence Mshandu for saving his life.

"We had just left the garage at 6.15am where we usually buy things before going to work. I was seated in the front seat.

"I froze when I saw our taxi heading straight to the truck which was in our lane. Simultaneously, I saw the Quantum going head on with the truck in a space of seconds," Mncina said.

He said there was no screaming inside their taxi as most people were asleep.

"Instead of heading straight into the truck, Lawrence swerved to have the truck hit on his side and that is how he lost his life," said Mncina.

"We are sending our deepest condolences as the province to the families of the deceased and wishing a speedy recovery for the people in hospital.

"As not all will be buried in the province, we as the department, the Road Traffic Management Corporation, Road Accident Fund and Komati, will help with funeral arrangements," said Ngomane.

A Limpopo family also told of their pain at losing four relatives in a crash which claimed five lives and injured five more people along the N11 road outside Mokopane on Tuesday evening.

This is the second tragedy to hit the province within three days after a vehicle overturned on the R555 Road near Burgersfort, killing four people and injuring seven on Monday.

Her son, who was doing his last year in mining engineering at Wits University, was months away from graduating.

"He was a loving son. I remember how he would call me 'Moms' all the time. He wanted to do so much for me and take me to all these fancy places once he gets a job," she said.

A copy of Lesiba's university results for 2014 and 2015, which reflected that he had achieved A and B symbols in all his subjects, was shown to Sowetan. In his second year of study, he obtained 94% in mathematics.

Lesiba's cousin Lethabo, who also died in the crash, was also doing his third year of study at the same university.

Lethabo's mother Grace Baloyi, 42, described her son as an intelligent young man who was full of laughter.

Yesterday, relatives and friends had gathered at the family home in GaMolekane.

Ezekiel's sister Khimi Dlamini could not contain her tears. She said that the men were on their way from buying groceries in Mokopane as the family was preparing for their grandmother's tombstone unveiling which was set to happen on Saturday.

On Monday, six people were killed and 50 injured after their bus crashed into a stationary truck along the N8 outside Bloemfontein in the Free State.

Three pupils were killed after a minibus taxi ploughed into a crowd of school children outside a nightclub in Kwazakele in the Eastern Cape on Sunday. At least four pupils were injured, with the driver speeding off from the scene.