Calls for ANC integrity committee to be given more powers 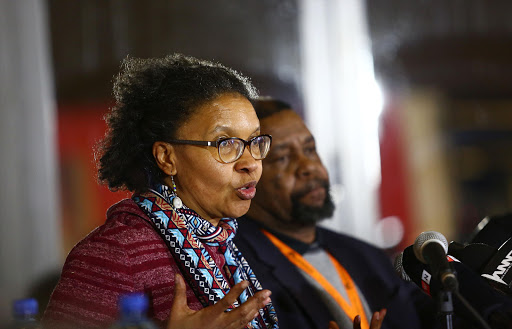 ANC NEC member Febe Potgieter-Gqubule answers a question during a media briefing on the commission of Strategy and Tactics that delegates deliberated on during the ANC Policy Conference in Nasrec as Joel Netshitenzhe listens. Picture: Masi Losi

The ANC is proposing that the party’s integrity committee be given more powers to take its own independent decisions‚ including the authority to summon members and suspend those facing allegations of wrongdoing.

This was agreed to during the plenary of the national policy conference of the ANC in Nasrec‚ Johannesburg‚ following closed-door discussions on the organisational renewal of the party.

The ANC integrity committee‚ headed by struggle stalwart Andrew Mlangeni‚ has been battling to clamp down on errant party members simply because it has no powers in terms of the constitution of the ANC.

The committee has to go through the leadership of the ANC whenever it wants to deal with members bringing the party into disrepute.

Briefing the media on the outcomes of the conference commissions‚ former ANC national executive committee member Febe Potgieter-Gqubule said discussions on organisational renewal included the social distance between voters and the party as well as corruption.

There is also a proposal on the reduction of the ANC national executive committee to ensure that “the best of the best in the ANC form part of the NEC“.

The ANC currently has 80 directly elected NEC members plus the top six officials and the proposal is that the party’s highest decision making structure in between national conference should constitute some 40 to 65 members to enhance the quality of debate in its meetings.

The policy conference has also proposed that in the run-up to national conference in December branches should settle the debate on whether there should be two deputy presidents or a second deputy secretary general.

Potgieter-Gqubule said this was one of the attempts to root out factionalism and divisive slate politics in the ANC.

“We should not have a single faction occupying all the positions. There is a proposal that whoever is second for each position in leadership automatically becomes available for other positions.”

Delegates could not agree on the proposed changes to the top six structure.

ANC policy guru Joel Netshitenzhe said it was never too late for the ANC to correct wrongs.

“It is never too late to ensure that this movement corrects itself in order to ensure social cohesion in South Africa.”

The organisational renewal commission also recommended that each of the ANC’s approximately one million members be allowed to directly vote for their preferred leaders.

The ANC’s policy conference does not have decision-making powers but merely makes recommendations to the national elective conference in December.