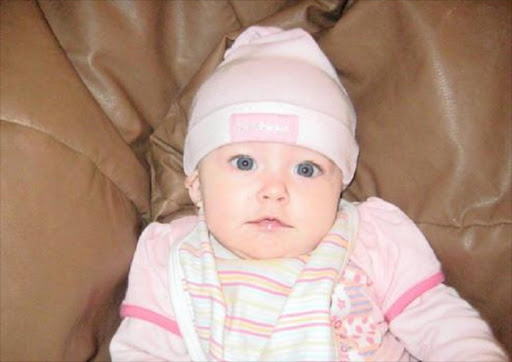 The Western Cape government is to blame for the death of a baby at an unregistered daycare centre‚ a judge has found.

Five-month-old Ava Barley was asphyxiated after she rolled off a bed at a Cape Town daycare in 2010‚ and Judge Daniel Dlodlo found that despite its excuses and “bald denials” of responsibility the social development department was liable to pay damages to her parents‚ Craig and Riette.

The Barleys also won a negligence case against the owner of Aunty Dawn’s Daycare Centre in Pinelands‚ Dawn Moore‚ but the court heard that she had emigrated to the UK and ignored a summons served on her there.

“She’s done a runner‚” Craig Barley said adding that he and his wife were relieved by Friday’s judgment in the High Court in Cape Town but had not yet felt emotionally ready to read it.

Barley said the couple “lost everything in one day” on October 14‚ 2010‚ when Moore found Ava’s body trapped between her double bed and bedside table 45 minutes after putting her to sleep between some pillows.

“After the accident we packed all our stuff up and within two days we were in Hermanus with my folks‚” he said.

“We can’t come back to Pinelands because of the memories. We both gave up our jobs and my wife has not worked again because we can never send any of our kids back to daycare.”

Since Ava’s death‚ the Barleys have had two more daughters — Erin‚ 5‚ and Eve‚ 1 — and their eldest child‚ Chloe‚ is now 10. “We’ve been very blessed‚ but we had to go to court to help other parents‚” said Craig.

“We want to draw attention to how daycares are run. You walk into a place‚ it looks legit‚ there are certificates on the wall‚ there’s a website‚ but it turns out that it’s actually dangerous.

“Only after a horrible accident like what happened to Ava do you realise what’s actually going on.”

In his judgment‚ Dlodlo said Moore applied to the social development department for registration of her daycare in February 2008 but received no more than an acknowledgment. By the time of Ava’s death‚ she was looking after 15 babies and toddlers but had only three cots.

Neither Moore nor her only employee‚ a domestic worker‚ had qualifications or training to look after infants or toddlers‚ and investigations after Ava’s death uncovered “severe health and safety risks”.

Patricia de Lille‚ MEC for social development at the time‚ announced a six-month amnesty for more than 2 000 unregistered daycares in the Western Cape after Ava’s death‚ saying: “The amnesty period represents an opportunity for all of us — government‚ creche owners and parents alike — to start complying with the Children’s Act‚ which is there to protect and nurture our children.”

But expert witness Terrance November‚ a social worker at the Early Learning Resource Unit in Lansdowne‚ told Dlodlo that the Western Cape still had numerous unregistered daycares. The law said applications should be dealt with in six months‚ he said‚ but some creches had been waiting five years.

November said on Monday that lawyers had advised him not to comment further. Sihle Ngobese‚ spokesman for social development MEC Albert Fritz‚ said he was unable to respond to detailed questions because the judgment was still being studied. The department has 30 days to appeal.

Dlodlo said the department’s arguments in court had “significant shortcomings”. And in spite of Ava’s death‚ “I find it completely strange and unacceptable that on 31 January 2013 (some five years after first applying for registration)‚ Moore’s attorneys were still desperately trying to get the department to register her early childhood development facility”.

He added: “The department’s failure to comply with its statutory duties seriously compromised the care and safety of the children at (Aunty Dawn’s)‚ and this caused or materially contributed towards the death of Ava.

“I state categorically that the department did not present sufficient evidence to demonstrate that there were resource constraints which justified its failure to act.”

At the time of Ava’s death‚ Moore said: “I loved her to bits. I used to kiss and cuddle her constantly. She was a sweet‚ gorgeous baby. I am terribly distraught at what happened.

“When I discovered her on the floor I immediately started cardio-pulmonary resuscitation. When the paramedics arrived they continued.”

Another court hearing will decide the damages the Western Cape government and Moore must pay to the Barleys.