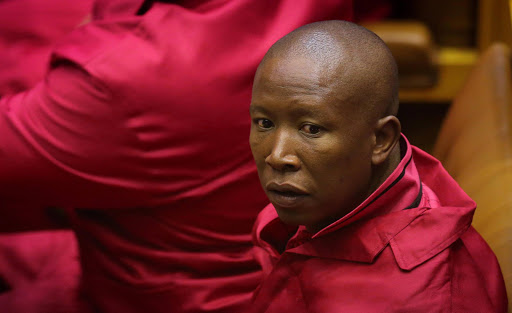 Leader of the Economic Freedom Fighters Julius Malema is pictured ahead of President Jacob Zuma's State of the Nation Address (SONA) to a joint sitting of the National Assembly and the National Council of Provinces in Cape Town, South Africa. Picture Credit: REUTERS/Sumaya Hisham

The Economic Freedom Fighters have confirmed reports that party leader Julius Malema is under surveillance and questioned the role of state security and home affairs.

“We know that a private foreign family‚ the Guptas‚ has had access to the travel itinerary and ID number of a party leader and member of the South African Parliament‚” the party said in a statement.

“We cannot think of any other reason why they would spy on him‚ except with the hope to find him isolated and take his life. We say this because most of the trips that the media has written about were never publicly announced.

“We also know that it is impossible for the Guptas‚ on their own‚ to attain this information without the help of both Home Affairs and State Security.”

In a hard-hitting statement‚ the EFF said a confrontation with the controversial family – which has yet to comment on the allegations — was inevitable.

“They have no right whatsoever to spy on the EFF leadership and they must know that as EFF we are not scared of them‚” the party said.

Party spokesman Mbuyiseni Ndlozi said‚ without going into specific details‚ that Malema’s telephone calls were being monitored. “As an organization we are concerned about the safety of the CIC. Not so long ago‚ we have had to track a car that was following him around.”

The party plans to report its evidence to the inspector general of intelligence.

The Sunday Times reported yesterday that leaked documents had revealed that the Guptas had allegedly been spying on high-profile banking executives‚ their family members‚ a former cabinet minister and a business rival.

The report said that Absa CEO Maria Ramos and her husband‚ former finance minister Trevor Manuel were among those who had been tracked.

Their personal information was contained in a spreadsheet in the possession of senior Gupta executive Ashu Chawla‚ according to leaked documents seen by the newspaper.

The Sunday Times said it was unable to determine why Chawla had the spreadsheet‚ given that the Guptas had refused to respond to media queries.