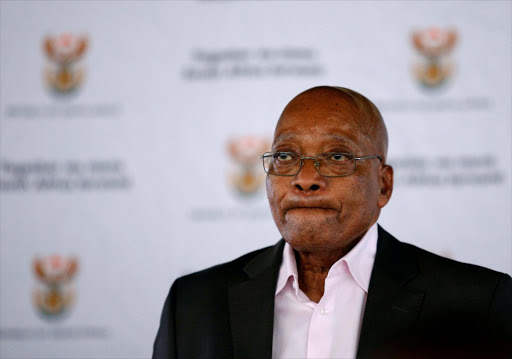 This is according to leader of the Democratic Alliance Mmusi Maimane who was speaking on 702 radio about “exposes” into journalist’s behaviour on the website‚ White monopoly capital leaks ( wmcleaks.com).

The anonymously-run website has targeted journalists who have criticised the Guptas or their relationship with Zuma. Maimane said surveillance may even extend to politicians and that it was the work of a “dictator“.

The website www.wmcleaks.com “revealed” photos of ex-Business Day editor Peter Bruce visiting a woman in Parkhurst last year‚ who they claimed was his mistress. It also had pictures of him walking in the park with his wife and sitting at a restaurant with friends. The website suggested he had visited the woman regularly‚ which implied the surveillance took place over weeks.

Gupta links exposed by investigative agencies amaBhungane and Daily Maverick investigative unit Scorpio https://www.dailymaverick.co.za/article/2017-06-23-scorpio-and-amabhungane-guptaleaks-direct-evidence-gupta-henchmen-prepared-fake-race-baiting-tweets/#.WUy68Wh97IU show that the Guptas were very unhappy with a 2015 Sunday Times column by Bruce‚ which criticised their relationship with President Zuma’s son Duduzane. The Guptas wrote tweets critical of Bruce for their fake twitter accounts to use.

Analysis by journalists of documents posted on the wmcleaks site show:

The first documents on the site accessed by Eyewitness News (EWN) http://ewn.co.za/2017/06/22/more-details-on-gupta-paid-twitter-s-surveillance-report journalist Barry Bateman were strikingly similar in format to ones created by State Security Intelligence officers‚ insiders in the agency confirmed.

The documents included the ID number and the phone number of a woman Bruce had visited. After Bateman asked the Department of State Security if state resources were being used to spy on journalists‚ a document containing this information was removed from the site.

A different PDF document with photos of Peter Bruce visiting a women were also posted on the site.

A Daily Maverick investigation revealed this pdf document was created by a user called Saurabh‚ who was India in 2016 when the document was made.

A Saurabh Aggarwal worked for Gupta owned Sahara computer company in IT from 2008 to the end of 2010. He then worked at the Gupta owned New Age newspaper from 2011 until 2014. He now works in India. This indicated a link between the Guptas were involved in the alleged surveillance of journalists and the site wmcleaks.com. Aggarwal also lived at the Gupta compound in Saxonwold‚ according to EWN and was described as a relative of theirs.

This document created by Saurabh has now been removed from the website.

Following the expose linking the Guptas to the story on Bruce‚ he told Daily Maverick that he intended suing them for crimen injuria.

According to EWN‚ an account linked to the Guptas tweeted a threat to Bruce a few months ago telling him that he had been under surveillance.

Fake twitter uses commented on the wmcleaks story and tweeted about it. They have odd South African names‚ despite similarities to common names‚ and include Banele Oosthuizen‚ Dova Groenewald and Dipalesa Jones.

Mmusi Maimane said of the surveillance: “The biggest concern is the fact that we are now living in South Africa where Jacob Zuma is literally copying everything that Russian president Vladimir Putin is doing. These are trends of a dictator.”

“These [ dictatorship] don’t begin just simply overnight and suddenly you live in a dictatorship‚ you go through someone who is pathological somebody who effectively will do whatever it takes with PR agencies what has become clear — what Barry is citing there are already work against journalists. I wouldn’t be surprised if there were works against other politicians and opposition leaders.”

Maimane said: “This is a script that has been written by many dictators all over the world.”