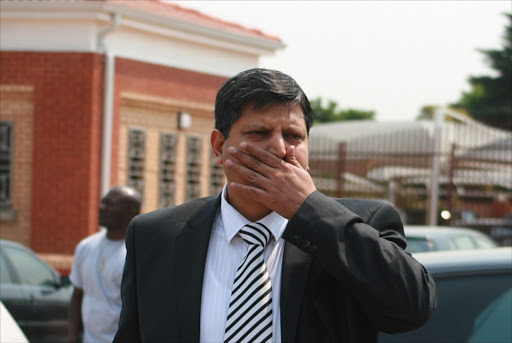 Billionaire publisher Atul Gupta outside the Randburg Magistrate's court in Johannesburg, South Africa on 27 September 2010. Gupta was charged with obstruction of justice and arrested on 25 September 2010, however the case was dropped due to lack of evidence. Gupta was also allegedly subjected to xenophobic behaviour from the police. (Photo by Gallo Images/The Times/Puxley Makgatho)

Former Home Affairs Minister Malusi Gigaba appears to have bent over backwards to ensure that the Gupta family were irregularly granted citizenship‚ letters released by the EFF suggest.

An immigration expert on Monday called the apparent early granting of citizenship highly suspicious and the EFF now says it will go to court to have the Guptas’ citizenship revoked.

Gigaba and the Guptas have yet to comment on the documents. The department says it is trying to verify their authenticity‚ but The Times has located correspondence within the thousands of leaked Gupta emails which supports their authenticity.

One of the letters released by the EFF and which appears to bear Gigaba’s signature is dated May 30‚ 2015. It purports to show Gigaba writing to Ajay Gupta to inform him that the family’s representations had resulted in their application for citizenship being successful.

“I have decided by the virtues of the powers vested in me under the South African Citizenship Amendments Act to waive the residential requirements in regards to your application for naturalisation and grant you early naturalisation.”

But‚ five months earlier‚ the then director-general for home affairs‚ GG Hlatshwayo‚ had written to the family declining their application‚ saying they had not lived in South Africa for the required five years. This letter was also released by the EFF on Monday.

The correspondence had followed an application for citizenship in 2013 from Ajay Gupta; his wife‚ Shivani; his mother‚ Angoori and their two sons‚ Kamal and Surya Singhala.

The Gupta email leaks over the last three weeks have painted an increasingly detailed picture of Gigaba and the Gupta family. Gigaba has vehemently denied that he has played a role in the capture of the South African state but the EFF release on Monday raises more questions.

The EFF’s spokesman‚ Mbuyiseni Ndlozi‚ said: “This is proof that the Guptas are not attempting to capture the State but have already captured it and all its leaders. This shows that everyone is already dancing to their tune.”

Home Affairs spokesman‚ David Hlabane said the department was searching for the necessary folders and documents to verify the information being reported.

“We do not want to pre-empt or prejudge anything in terms of whether this is a serious matter or not. We first have to see what’s in the files.”

It was not the only citizenship granted to a Gupta in 2015. Varun Gupta also received his naturalised citizenship seven months after his uncle and aunt.

The Times has discovered within the leaked Gupta emails a stream of correspondence between the Guptas’ trusted business associate Ashu Chawla and several senior home affairs officials in April of 2015‚ shortly before the purported Gigaba letter.

These include the family being urged to write personally to Gigaba and to explain to him the socio-economic impact the family had had in South Africa.

They are identical copies of each other written on the letterheads of two of the Gupta’s companies‚ JIC Mining Services / Westdawn Investments and Oakbay Investments.

In the letters‚ Chawla speaks to how the family has made significant investments in the country‚ including investing R1-million to buy children of 75 North West schools “sports kits‚ clothing and equipment”.

Other socio-economic contributions include apparently running a school feeding programme‚ in which they provide the children with fast-food chicken.

Chawla said among the family’s notable achievement was creating jobs for 5‚000 people. They dreamed of creating 100‚000 jobs.

Chawla said the family had also invested over R25-billion.

But immigration expert Leon Isaacson said the granting of the early citizenship to the Guptas was highly suspicious.

He said that from late 2013‚ people who wanted to apply for citizenship had to live in the country not for five years‚ but rather 10 years.

“It’s highly‚ highly unusual‚ and extremely unlikely to get early citizenship‚ without now living in the country for 10-years.”

He said he had represented a number of wealthy international billionaires‚ who‚ despite investing huge sums of money in the country and employing thousands of South Africans‚ had not been granted early citizenship.

“Citizenship is not granted to a family. It is given to an individual and each person is named in the letter. “You would not get such vague letter‚” he said of the letter apparently bearing Gigaba’s signature.

“It looks like corners have been cut and favours granted.”