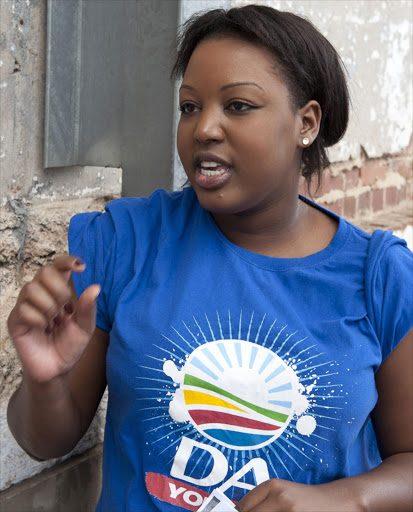 The DA’s Mbali Ntuli‚ who is facing a disciplinary hearing for allegedly contravening the party’s social media policy‚ says she appreciates the “outpouring of support” she has received‚ adding “it’s good to be in the trenches with some amazing people”.

Despite a recommendation that there was not enough evidence to support a complaint lodged against her‚ the DA announced earlier this month that it would proceed with a disciplinary hearing against Ntuli for allegedly liking a comment on Facebook which characterised former leader Helen Zille as a racist.

According to an investigation report compiled by the DA’s legal federal council (FLC)‚ the party’s disciplinary committee‚ it was recommended that no further action be taken against Ntuli to avoid more harm being done.

The DA’s federal executive however was not happy and insisted that Ntuli be charged.

In a Facebook post‚ Ntuli‚ a DA leader in KwaZulu-Natal‚ said she had sought legal advice and looked forward to the opportunity to “present the whole case and it’s real background”.

“My legal team has been in communication with the party. We have left the matter in Fedex’s (the DA federal executive) hands to consider whether they believe a hearing is most suitable in this matter. Either way my team and I are prepared for the case.”

She said she had “decided when the controversy around my alleged ‘liking’ of a comment on my own post regarding the hypocrisy of the party’s social media and how we had people within the party who had become the social media gestapo‚ to not comment until its conclusion”.

“I’ve been rather bemused by the efforts of those who have used this matter to say all manner of things on the case and what actually transpired in the party prior to it. They have often been wrong on all counts. Still receipts‚ as the kids call them are always best kept till the end‚” Ntuli added on Facebook.

However‚ she had decided to give a short statement on the case.

“Firstly I appreciate the outpouring of support I have received from so many of you. It’s been overwhelming me to me the type of support that people‚ many that I don’t know personally have been offering to me. I’m really grateful.

“Thank you to all my colleagues who have reached out with their own fervent versions of support. It’s good to be in the trenches with some amazing people.”

Zille is facing the party’s federal legal council for her Twitter comments about colonialism.

The current premier of the Western Cape‚ she is facing charges of bringing her party into disrepute‚ after she tweeted on March 16 that not all of colonialism’s effects were bad.

Zille’s fate has split the party between those who remain loyal to her and leaders who believe she may well be expelled for her comments.